Chris has asked that I try my hand at this month’s newsletter, so if I miss anyone out, I can only apologise in advance.
Okay, here goes! Well the clocks have gone forward and British summer time has officially started. Many of you have been training hard for marathons over the winter months so I hope everything had been going to plan for you. Colchester half marathon had an excellent turn out again, with our very own Chris Warren coming in at 1-22-23 and Jake Darkins hot on his heels at 1-29-40, a fantastic 10 minute improvement for Jake on last year! Charlie Keitch had a good run in 1-33-20 after a break due to injury and man flu. Also, John Ferdinand completed this distance for the first time! Far too many others to be able to mention all of you but we’ll done everyone for some excellent times and PB’S.
The week before colchester half was the Essex 20, an excellent race in the lead up to a spring marathon, it’s a tough 3 lap undulating course. The course was wet and windy with Ryan Day flying in at 2-15-43, a very impressive time and his debut at this distance and also bagging a Club Silver Standard. Also, smashing his previous time was Lee Clarkson which got him a Club Bronze Standard. Others were Paul Davidson, who achieved a Bronze; Patrick Reynolds; and Paul Hollidge. Well done guys! Another 20 mile race at Wymondham 26th March was ran by Matt Jones 2-23-17 which got him overall 69th place and a Bronze club standard. Essex relay was upon us again. The men’s team was headed up by Charlie Keitch, Ryan Day, Ben Ficken and Chris Warren with a combined time of 1:14:38 which gave them 9th place in the men’s open, not forgetting the other men who also had excellent runs and some brilliant 5k times. Watch out Micky Edwards, here they come!!
Other events were Brentwood half for Tom Fowler , Ben and his four legged friend Janice paid a visit to Kent, Trial marathon included Paul, Rodger and Derek. Also taking part were Joe and Adam who made it into an Ultra! Rodger, Derek and Paul ran the off-road marathon starting in Stradbrok in a time of 4-46. Joe and Adam also completed this course and even after getting lost and making it 29 miles they completed it in 4-15!! I would like to wish everyone competing in spring marathons good luck.
Just a couple of things to remind you of; the AGM is on 12th April at 8pm at Great Bentley village hall. Anybody wanting a run can do so before if you wish. If as many of us could attend as possible that would be great. Rodgers trial runs will be starting again on 2nd April at Alton Waters. #getinvolved .
So, on to runner of the month. So many of you have been out there again and putting in some excellent efforts with great PB’s and results. However, one person has really shone for Chris and myself. This guy is flying! Like a tornado, he has seemed to come from out of nowhere and destroyed everything he has touched (in a good way)! He had a blinding XC season. He earned his first club gold standard at the Essex Relay which has also got him 7th position in the clubs top 10! He ran  the Essex 20 gaining a silver standard. He is a quiet guy who trains very hard and a pleasure to know. I would like you wish him every success in his pending marathon. So, congratulations to Ryan Day, you are our runner of the month for March . 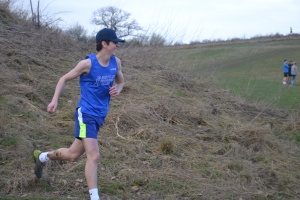