This month ended with a bang at our annual awards night, held at Wivenhoe House Hotel, brilliantly organised by Karen Skene, my trusty vice-captain. A great night was had by all who attended; food was eaten, the drinks flowed, and some dancing also happened. A great chance to see each other dressed up, and didn’t we all scrub up well? Two of us even had the same great taste in dresses!

The awards were also lovely to see, so many ladies have done great things over the course of the year, ran terrific races, improved week after week in training, and it was good to see these achievements recognised, not only by your times for club champs, but also voted on by your fellow club members.

Club champs results can be seen on the website, but for those that couldn’t make it; the other awards won by the ladies were as follows:

Meera was not there to collect her award, as she spent the weekend in Cyprus competing in the 4 Day Challenge, consisting of a 6k time trial, 11k mountain trail run, multi-terrain half marathon and a 10k city run over 4 days. Not much time left for sunbathing!

This coming Sunday is the second 53-12 cross country event, it would be great to see as many ladies here as we did at the first one! This one is held by Harwich Runners, and is certainly a testing course, no doubt about it. There will be mud, and lots of it, trail shoes or spikes are a must! Bring a bin bag to put your wet and muddy stuff in after, and some warm dry clothes to put on. I know there are people out there who will say I am going to put you off, but I believe in telling it like it is! It’s a chance to be a kid again and get muddy, just think of the cake after!

Speaking of which, at this race, we are not going bring our usual cake and coffee, but would like to support Harwich by purchasing theirs. They have more expenses than some of the other races do, as there are no facilities at this venue apart from a barn, so they have to provide portaloos which are not cheap. If you want to bake a cake to donate to them to sell, I am sure they would be very grateful!

I hear lots of you turned out to help at our Parkrun takeover this month, unfortunately, I couldn’t be there myself for this one, but I’m sure we will do it again next year. It is also good to see people supporting the new Clacton Parkrun, don’t forget Mersea Parkrun starts soon too, so plenty of local choice!

This newsletter would not be complete without mentioning the brilliant trail run organised by Meera, Claire and Luke. What a great event this was, with blow-up bananas being photographed in all sorts of places! The route was beautiful, and the food and company afterwards could not be faulted. The weather was kind to us too, with brilliant sunshine and not too cold temperatures. I’m really looking forward to the next one.

Runner of The Month has been a really difficult choice this month, and I have been stuck between two ladies who, in my opinion, have really achieved something worth recognising this month. Having said that, and after a conversation with The Chairman, I am going to award them both with Runner of The Month status! Hopefully Eric won’t mind printing two certificates! These two ladies contribute much to the club, regularly giving up their time to act as LiRFs running and supporting our training sessions. Both these ladies ran the Snowdonia Marathon at the beginning of the month. This is probably one of the most challenging marathon courses in the UK, so to get a 15 minute PB on it is quite something, as is winning your age group. Those two ladies are, of course Caroline Searle and Barbara Law. Well done ladies, I know you both put a lot of hard work into preparing for this event. 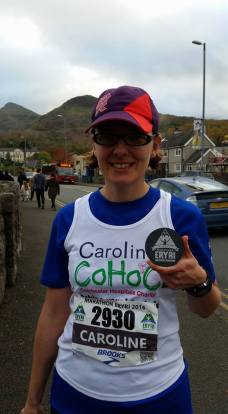 I am not going to make a habit of awarding two runner of the month, so don’t get all excited!

Here’s hoping to see a big blue presence at Harwich on Sunday!