When the weather starts to get a bit dodgy at home our runners take to events around the world to get their fix. A late entry from last week, probably due to the time difference, was a bronze standard from Sue McKay for the Darwin (yes Darwin) 5k.  Next up looking for sunnier climes was Meera Rajoo-Oakley who has taken herself off to Cyprus, and after going all that way why do only one race when you can do four……in four days!

The Cyprus four day challenge is set in the Akames National Reserve Park in Paphos. It’s a development free zone which gives runners access to spectacular flat and steep (!) trails surrounded by the wilderness…..what’s not to like? Oh did I say that its likely to be hot!  So to the races then, day one saw Rajoo-Oakley take on a 6k time trial which she completed in a fantastic 27:56.  Day two saw an off road hill run, just 11k today in 1:25:40, day three saw the distance increase to a half marathon which Rajoo-Oakley completed in 1:52:24.  Finally day four was a 10k road race which she completed in a cracking time of 45:21, this gave a total time of 4:21:22 and a superb 18th place overall. Brilliant result Meera well done! 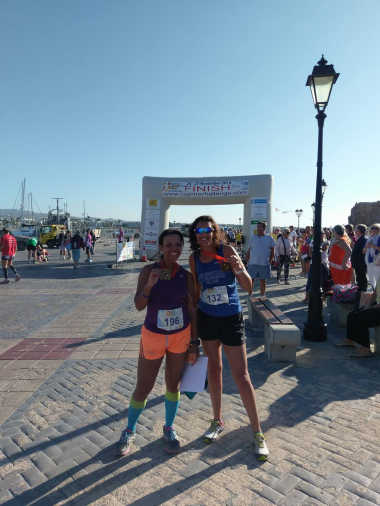 [The finish of the Cyprus 4 day challenge – look at the blue sky!]

Finally, Kev Stevens took himself off to Italy to do the Florence Marathon, despite a few injuries including a pulled shoulder Stevens completed the 26.2 in 4:03 limping home the last 16 miles – a top effort! 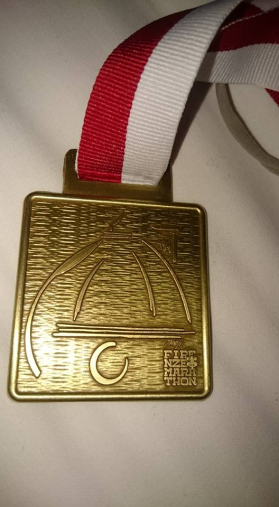 Closer to home, well down in Kent, after a month off our new Club Runner of the Year, Paul Blackwell, got itchy feet and got himself back on the marathon trail with a double. On Friday it was the Oyster Bay marathon in Herne Bay which was a flat but windy course. Blackwell followed this up by doing the Saxon Shore marathon in Deal on Saturday.

Parkrun was the name of the game for lots of blue vests as normal on Saturday. Ryan Day is making mincemeat of the club standards notching up his third silver standard in his third race and in his third distance! Day came first at Clacton over the 5k distance finishing in 18:16. Dave Goldsmith also got himself on the podium finishing second in 20:14. Louise Upston enjoyed her first outing on the prom finishing in 28:16. Patrick Reynolds (21:20), Kevin James (22:52), Jack Wicks (25:26), Rebecca Conran (27:37), Vicki Parker (30:08), Davina Swindell (32:07) and Sandra James (35:40) joined Day in toeing the line in Clacton.

Doing some tourism and having their own personal race over at Kesgrave were Lee Clarkson and Matt Jones. Jones tried to stay with the pace that Clarkson set however, it was Clarkson who broke the tape first in 20:43, just seven seconds off a PB, followed closely by Jones in 21:26.