It was a hot and muggy Wednesday evening for the 2nd running of the Geoff Day Memorial 5k race which saw both Joe Alexander and Vicky Presland win for the second year in a row.  Alexander won the overall race in 17:12 and Vicky led the ladies home in 11th place overall in 20:00 dead.  It was great to see so many runners, 54 in total, which included some from the Day family, and volunteers enjoying the post run food extravaganza and saw Geoff’s dad Alan present the race awards.  Also announced on the evening were the overall awards for the Mickey Edwards handicap series, there have been some excellent time improvements from a number of runners during the series and the result was a close run thing.  Winning the series with 146 points was John Ferdinand, he was run very close by Jo Morris who secure the silver position with 145 points and Leoni Harvey in 3rd place with 141 points.  Congratulations to you all.  A special mention at this point to Chris Warren who has organised the series again this year – thanks Chris.

[Joe and Vicky receive their trophies from Alan Day]

Sunday saw the running of the Kirste 5 Memorial Race, this race was a poignant one for Rebecca Conran as Kirste was her Sergeant when she was training to be a police officer who sadly died of breast cancer in 2012, this race is put on by her running club, Benfleet, in her memory.  It was run in very hot conditions and a course that took you across fields, through woods, across wooden bridges and mid-calf grass.  All that said and done Rebecca completed the 5 mile course in 48:31 knocking a magnificent 6 minutes off her personal best in doing so!  Along with Rebecca Louise Upston and Jack Wicks also ignored the heat and the challenging course to complete it in 54:42 and 54:43 respectively.

Friday night saw 13 blue vests take on the 5 mile race at Brantham which is advertised as a undulating course, the fact that the course includes a monster of a hill seems to be immaterial. Meera Rajoo-Oakley led the GBRC contingent home, the 6th lady finisher, in 1 PB time of 36:22, a time which also secured her a Silver club standard.  There were 2 debutants at the 5 mile distance at Brantham Louise Upston finishing in 47:46 and David Iddon in 47:57 both excellent performances.  There were also nice sparkling new personal bests for Gemma Colling secured a PB running the course with Karen Skene setting the pace in 44:55, and Leoni Harvey who broke the tape in 45:22. Rich Moor led the men home in 34:16 and in doing so earned himself a silver club standard, the contingent of blue vests were completed by Matt Jones (37:21) Frank Gardiner (40:30), Gary Hill (41:57), Darren Willey (44:22), Anthea Colsell (44:22), Jack Wicks (45:05) and John Bush (48:21). 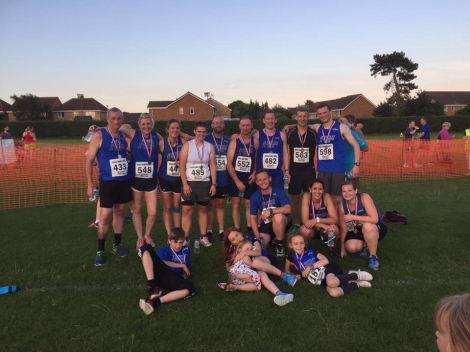 [The blue sea at Brantham]

Saturday saw Alison Clarke brave the Mersea Triathlon which consisted of a 750m swin, 20k bike ride and 5k run including a nice beach finish!  She completed the Sprint version of the event in an excellent 1:41:03.  Also on Saturday the usual Parkrun ritual was again observed by a large contingent, the furthest piece of tourism saw Kevin Stevens run the 5k course at Penrose in Cornwall in 20:36.  Not going so far afield for their Saturday Parkrun fix saw Charlie Keitch secure a podium finish for the second week in a row completing the Maldon Promenade course in a frustrating time of 19:01. His fix was aided and abetted by Claudia Keitch (29:36), Scott Young (23:50) and Simon Miller (21:22).