A very busy weekend for the blue vests of Great Bentley Running Club with some massive personal bests (PB’s) and club standards of all colours being achieved at both marathon and 10,000m races over the weekend.  There was a sea of blue at the inaugural Harwich runners 10,000m event at Little Bromley where the men’s stand out performance was achieved by Chris Warren who secured a PB in a time of 36:21 which not only secured him 17th place in the race but the 9th position in the all time GBRC 10k performances.  Following Chris home for the men were other PB performances from Tom Fowler (40:06) which also earned him a sliver club standard and Andy Stephens who smashed over 4 minutes of his previous best time to break the tape in (43:28). 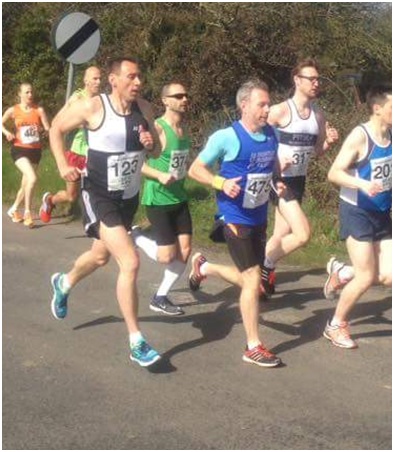 As usual the ladies were led home by Vicky Presland who had another amazing run finishing in 52nd place (5th lady overall) in the race secured a PB, first place in her age category but also flew to the top of the GBRC performance list for 10k in a time of 40:16!  Lorna Sharp earned herself a silver club standard completing the 10,000m in 51:18 and Louise Reeve smashed her personal best time by over 6 minutes with a time of 58:58.

Both Katie and Millie Presland took part in the junior race at Bromley, Millie wearing the green vest of Colchester Harriers completed the 2,000m in 3rd place overall and the 2nd girl home whilst Katie finished as the 3rd girl home and 7th overall.

Running about 20 miles further were some intrepid Marathon runners who took on the course in Manchester, our runners were brought home by Charlie Keitch in a personal best time of 3 hours and fifteen minutes, another personal best was achieved by Karen Skene who knocked 7 seconds off her previous best time finishing the 26.2 miles in 4 hours and 2 minutes.  Running her first marathon and finishing in four hours and twenty four minutes was Deborah Cubberley a time which secured her a bronze club standard, she was supported round the course by Paul Hollidge who finished in the same 4:24 time.  Janine Simpson finished in a time of 4 hours and 31 minutes.

Whilst talking marathons we have to mention Paul Blackwell who completed another 2 this weekend as he marches onwards towards the 100 club running the Ranscombe marathon in Kent on Saturday his 63rd, he then drove up the M6 to Manchester to complete his 64th running the Manchester marathon on Sunday in 4 hours and 39 minutes, this incredibly represented his fastest time this year – who said that running a marathon wasn’t the ideal preparation to run a marathon!
Also running the 26.2 miles was Simon Miller who took part in what he called an “amazing” Rome marathon; he completed the course around the historic destination in 3 hours and 57 minutes.  Simon said he would totally recommend the well organised race for any of you looking for a marathon abroad.

Saturday is Parkrun day and as usual GBRC had plenty of representation, this week Caroline Searle took up some tourism and undertook the 5k race at Wormwood Scrubs which is run on grass (with some nice mud courtesy of the recent rain) in 28:41.  We had seven runners at Colchester Castle first home was David Burrows in 20:12, Andy Stephens in a new course PB of 21:55, Anna Mills (23:35), Ade Cherry (24:18), Claudia Keitch(28:50) John Ferdinand in a new PB of 35:17 and Craig Warriner(37:23). Over at Harwich, Malcolm Jarvis finished in a course PB of 21:15, David Iddon who ran his first ever Parkrun in 29:22 and Linzi Iddon in another course PB of 38:12.

Finally on Saturday the juniors undertook Rodger Alexander’s trail selfie hash which saw seven of our juniors complete the course at Wrabness.