Well hello there! Or should I say cześć!? This past week has seen an intrepid bunch of Bentley Blues take to the streets of Krakow to the sound of music, the refreshment of water and the smell of pierogi (well, maybe not that last one but I suddenly had a craving and the last time I had pierogi was in Krakow so I let my mind wonder). Back to running in Poland! Saturday was parkrun tourism day for a group of Bentley and Running Colchester runners. Magdalena Komorowska reported that the course was nicely flat with beautiful sights and very well organised, with a hot tea at the end for everybody. She completed the course in 23:26, first in her age category, chased down by Anthea Colsell who crossed the finish line in 23:34 achieving a PB. Tomasz Komorowski rounded up the Bentley group in 24:26. 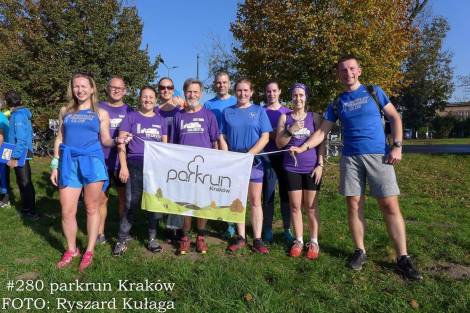 But parkrun was just the prelude to the big event: the Krakow Half Marathon which appears to have been an excellent race with music, well-stocked water and snack stations. The support was amazing and, even though only the Komorowscy could understand the cheers, it was much appreciated. Kathy Bishop lead the way completing the course in 1hr 49min 34sec. Anthea ran a half marathon PB after two years finishing in 1hr 54min 42sec and earning a silver standard in the process. Well done on your two PBs in one weekend Anthea! Helping her getting round on the last three miles was Magdalena, who crossed the line in 1hr 54min 43sec. And rounding up the group again was Tomasz who paced a Running Colchester lady in 1hr 56min 32sec. I’m sure many club members will be considering combining holidays with running in Krakow after such excellent reviews and times – I know I am!

Closer to home, in the land of the jam, runners enjoyed the annual Tiptree 10 on Sunday. This is usually the 10-mile qualifying race for the Essex Champs and it’s therefore well attended. The race is gun to chip so hopefuls need to be close to the started line to avoid the addition of those dreaded seconds over their goal times. First to cross the finish line was Charlie Keitch. He was pacing 1hr 10min and finished in 1:09:28. On the other side of those 10 min was Colin Farmer with a time of 1:10:53. Russel Clarke followed in 1:12:47. After him was Benjamin “wherewasjanicethistime” Ficken with a time of 1:14:23. First Bentley lady to complete the course was Eileen Shadford who achieved her quickest time since 2013 (1:16:14 if you must know), bagging herself a spot in the Club Champs. Tricia Stacey was next in 1:21:49. Hot on her heels were Gemma Camp and Eric Shaw. They run together in a fantastic time of 1:22:18 and 1:22:19 respectively, the pesky gun start adding mere seconds to the 1:22 goal time Eric had set himself. He should be very proud of his time, as it earned him an Essex Champs Silver for his age category and a coveted spot in the Club Champs. Congratulations Eric! Wow! I’m exhausted just typing this and we are only half way through the Bentley contingent at Tiptree! Charlie Williams must have been chasing down Gemma and Eric as he crossed the line in 1:22:48 achieving another Club Champs spot (the spreadsheets-keepers are going to be busy!). Hien Hoang was next in 1:25:59 followed by A.S. Wilson in 1:27:29. Jason Skelton (1:29:42) was pacing 1hr 30min and the sight of him must have spurred Beverly Shortley who completed her first 10-miler in 1:29:53, earning herself a gold standard in the process. Leoni Harvey (running under the pseudonym of Jennifer Aylen) was next in 1:37:42 beating Lee Clarkson who, in fairness, was pacing 1hr 40min and finished in 1:39:49 so gets the mention for the pacer closest to the target time. And to wrap Tiptree up we have Teresa Farmer in 1:51:35.

Sunday was a busy day with weekly junior parkruns taking place Sunday mornings up and down the country. At “The Rec” in Britain’s oldest recorded Angel Jasper ran in a time of 9:26, being 2nd girl and 10th finisher overall. Well done on your 57th parkrun Angel!

I will now go further back in time, to Saturday 13th of October to be precise, when Emma Levett-Welham took part in a  Saxons, Vikings and Normans 6-hnour event in the beautiful Ashford Forest, Sussex. The Kanga-Kanter event was inspired by Winnie de Pooh and she Emma set out to run half a marathon (her 4th this year) as she is recovering from an IT band injury but got slightly lost in the last loop (getting lost seems to be a theme with Bentley runners) and ended up running 14.5 miles of relentless hills in 3:29:45.

Emma in Sussex for the Kanga-Roo event

Another runner that tackled the half marathon distance was Jem Gibson. He was happy for the first 8 miles until he started having IT band issues and had to slow down. He completed the race in 2:00:46.

And now, for the grand finale of this report I give you a roundup of parkrun-not-races up and down the country.

Harwich was the second favourite parkrun with Bentley runners and saw Stephen Walsh break the 23-minute barrier in 22:59 and being very happy about that. Dave Jones was next in 28:41 with Mark Crittenden hot on his heels in 28:43 and Claire Poole in 28:50. Teresa Jones wasn’t too far off her PB in 30:18. Cherie Hipkins (31:27) and Leoni Harvey (41:32) completed the Bentley running representation.

Along the Clacton Promenade we had Mark Gare (23:01), Ray Baggs (23:18); Kevin James (23:44) and Sandra James (35:57). In Mersea Island Meatball was first dog slowed by his ‘hooman’ Luke Groves in 26 minutes exactly. Rob Blackman travelled to Sizewell parkrun and completed it in 21:21 and Matthew Jones headed to Hertfordshire to run the Panshanger parkrun in 23:38.

And with this we conclude this monster edition of the race report for last week. Well done to every single one of you. I may complain internally that there is loads to write about and I cannot longer sneak a report quickly at work (don’t tell my boss, Meera, I’m looking at you) but I love reading about all your antics and achievements and it allows me to run vicariously in your shoes. Now go and rest for Wix 5 – we all need to look pretty in the photo!