Just like the world cup final this year’s running of the Ipswich Jaffa Ekiden race was subject of a controversial VAR decision. An Ekiden race is run over a marathon distance with a relay of six runners, 2 10k legs, 3 5k legs and a single 7.2k leg. At the end of the race on Sundays team captain Paul Hollidge and his “Between a walk and a fast pace” were celebrating victory, however, this was following a manual calculation as the final runners all set off at the same time as there were a couple of important sporting events that were taking place later on Sunday afternoon.

As the organisers tallied up the results across the whole event the official results were posted late on Monday and “Cherry picked for speed” were declared the actual winners of the inter club race! The team made up of Ade Cherry, Harvey Lyon, Jason Skelton, Emma Town, Ryan Day, and Emma Welham ran the marathon distance in a total time of 3 hours 26 minutes and 57 seconds. They were followed in second place by “Meera’s maidens and a bloke called Russ”; Meera Rajoo Oakley, Sue Sorrell, Russ Sharp,  Leoni Harvey, Anna Mills and Anna Young; who finished in 3:30:46 and just a minute or so behind in third were “Run like a well oiled Bentley”  (who bagged the best name competition) Magdalena Komorowska, Danny Draper, Kevin James, Louise Upston, Paul Connell and Marion Simmons who ran 3:31:31.

This was once again a great event with 60 runners from the club taking part. Thanks must go to Meera who had the job of mixing and matching runners to get a very competitive inter club race going, there was only 15 minutes between the fastest and slowest teams. Well done to everyone it was a pleasure to spend the best part of Sunday with you all. 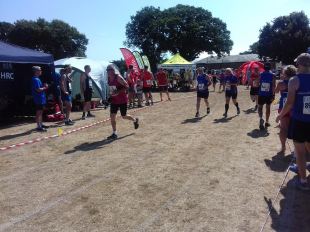 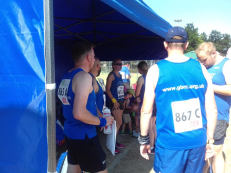 Deciding to run slightly further this weekend was Charlie Keitch who ran to “The Stones”. This is run along the Ridgeway, described as Britain’s oldest road and runs from the Chilterns to the North Wessex Downs. Runners experience some of the UK’s most breath-taking scenery and finish next to the 5,000-year-old stone circle at Avebury (although Charlie did note that you run to the Stones, round em and away from them to finish). Charlie took on the 2 day challenge with an equal split of 50k per day, he completed day one in 5:00:35 which was obviously sandbagging as on day 2 he ran 4:41:14 although the profile of the run suggested quite a large amount of day one was uphill! Keitch finished 5th overall which is a remarkable result but with the training that he has done, a well deserved one, well done a Charlie.

John Bush did a double this weekend starting with the Shark Run at Sawbridgeworth which was a timed event running a 3.28m lap – JB did 5 laps which was 16.4m but managed to fall and gain a few cuts and bruises.  Not to be put off he then headed off to Hornchurch for the 24 hour Spitfire Scramble where he did 6 of the 5.75 laps for a further 34.5 miles.

Saturday saw rather fewer numbers than normal turning out for parkrun. Tourism this week was supplied by James McCullugh who visited the superbly named Bedgebury Pinetum parkrun in Kent which is an undulating trail through the forest he completed the 5k in 23:24. A more usual spot for tourism saw Matt (22:02) and Liz (32:11) Jones run Hove parkrun.

This year has seen Teresa Farmer trying to break the 30 minute mark for 5k, she has come close on a number of occasions, however, on Saturday at Harwich prom parkrun Teresa smashed this target with a great run of 29:10 gaining a bronze standard into the bargain. Harwich also saw Janice run her 50th parkrun with Ben Ficken finishing in 20:02. Colin Farmer (20:29), Rich Moor (20:53), Emily Zethraeus (21:46) and Leoni Harvey (27:49) completed this weeks parkrun line up.