There was a mixture of the far away and the local this week; John Bush travelled all the way to Dorset to take part in the Bovington half marathon on Sunday ; an unusual half
marathon distance of 16.60 miles. John said that the race was great fun, with mud, hills and streams as well as the tanks. John finished in 4.03 watch time, and ended up with an awesome medal as well as some other treats 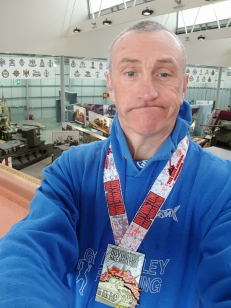 [John Bush with medal and tank]

Also on the Sunday, Helene Tyler took part, along with her Sister, in the Lincoln Santa fun run. 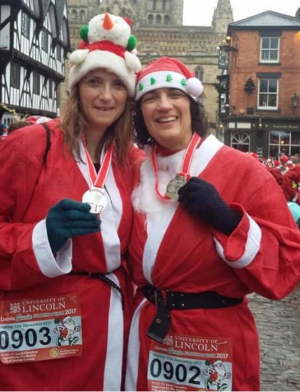 Back to the Saturday, and it was Winter Wobble time!

This approximately 10 mile race started at The Albion pub in Rowhedge, then running along both sides of the river trail to the Black Buoy in Wivenhoe and back, with a glass of mulled wine or cider at the start and finish, and also with either a Whisky Mac or Snowball at the halfway point “water station”.

Tim Ballard decided to try his luck at an alcohol fueled event, and found it very much his tipple, finishing in 4th place in about 1hr 10min, and confirming his fitness was back 😊 – a further endorsement of the Groves Method.

Brothers Scott Young and Charlie Keitch decided to synchronise their “run”, and ran and drank it large, finishing in 25th place(s) in about an hour and a half (who’s counting?), to collect the “best medal ever”, as described by Scott. 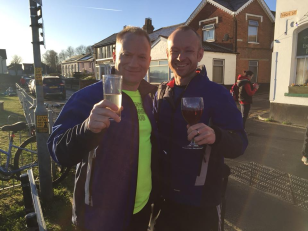 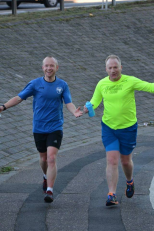 Ben Ficken for once ran a solitary race, without the faithful Janice, and despite being ill beforehand, and lonely during it, finished in a sobering time of 1:14:53.

[Ben Ficken at the Winter Wobble – didn’t he do well?]

The cold weather unfortunately caused the cancellation of the Clacton Sea Front Park run, popular for our blue vests normally, with too many puddles iced over to risk the run.

Matthew Jones ventured over to Harwich, finishing in 15th place in a time of (21.44).

Mersea Island Park run celebrated a first birthday, and had three impressive Bentley representatives this week; Sam Godden (22.38) was first lady, with Geraldine Springett second placed female in a course PB of (23.38) in her first park run since the long summer days, whilst Megan Hughes came first in her age category in a time of (33.04).

Unfortunately, again due to the icy conditions, the Colchester Junior Park run had to be cancelled ☹,so nothing to report here.