This week’s race report starts on Saturday, and it was a very quiet week when it came to parkrunning. With most of our club’s runners resting themselves ahead of the Wix 5 on Sunday, there weren’t many Bentley blue tops to be seen toeing the startline of the region’s various parkrun venues. At Colchester Castle parkrun Bentley’s sole representative was Craig Warriner, who was twentieth finisher in a time of 20:32.

Karen Skene took on Ipswich parkrun, finishing in 26:42. John Bush and Vicky Presland ran Harwich parkrun in 32:23 and 21:34 respectively. This was Vicky’s first time at Harwich parkrun. There were three Bentley runners at Mersea Island parkrun. Luke Groves was first across the line, finishing in 27:57, and John Booty (28:38) and son Harry (28:37) completed the Bentley representation. This week’s parkrun tourism comes courtesy of Nick Goodman, who took the opportunity provided by a fast and flat parkrun in Southend to knock 1:18 off of his parkrun PB, finishing in 22:12.

Ben Ficken and Janice didn’t run parkrun this week. Instead they headed to Christchurch Park in Ipswich to participate in the Dog Jog. The canicross event was a 5k run which took in two laps of the park. There were no official positions or places, but Ben and Janice were the first to finish, with Ben’s watch clocking 20:43. The pair were very pleased with their goody bag, which contained a good quality medal, a keyring, a snood, a draw string bag, a water bottle, a cereal bar and a dog toy.

Ben and Janice after completing the Dog Jog

Meanwhile Meera Rajoo-Oakley and Anna Mills headed to Ashdown Forest in Kent to take part in the Eeyore Expedition. The event was a six-hour time challenge, with participants completing as many laps as they wished within the six-hour time limit. Each lap was just around five and a quarter miles long and the pair decided that they would maybe do as many as three laps. Five laps later they had both covered full marathon distance! Anna completed her marathon in 5:00:45, and Meera completed hers in 5:01:33. 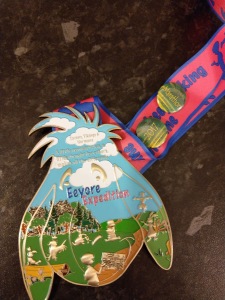 Sunday morning was an important one for our club – the morning of the Wix 5 mile road race. Every year scores of Bentley runners take part, and the field appears to be a sea of blue. This year there were seventy Bentley blue tops making their way round the Wix countryside. For the second consecutive year, the ladies took the team prize, with the club being the first to have three ladies cross the finish line. As is the case every year, there were many great performances. There were some outstanding times, and many club standards achieved.

Joe Alexander was the first Bentley runner across the line, finishing in second place overall in 28:31, inside the club’s all time top ten performances over the distance. Eileen Shadford earned herself another diamond standard, finishing in 37:44. Hot on Eileen’s heels, and also earning a diamond standard, was Helen Carey (37:47). Tricia Stacey earned a gold with her 39:51. Kathy Bishop also earned a gold standard in 39:31.

Earning silver standards were Tom Fowler (33:06) and Gemma Camp (38:27). There were bronzes for Vicky Law (47:49), Peter Benton (37:02), Tim Ballard (31:50) and Emma Wakeling (42:08). Emma was returning from a brief running break due a niggle which saw her miss the Tiptree 10 the weekend before, so she was very relieved to be running pain free. Paul Connell was targeting a gold standard, but missed out. However, his time of 31:17 was a new PB and improved on his time that was already holding a place in the club champs.

Neil Robbins at the Wix 5

Recovering from injury, Neil Robbins ran 44:40 in his debut 5 mile race and took a club champs place in the process. Also returning from injury was Sarah Fletcher, who set herself the goal of finishing in under 41 minutes, and crossed the line in 39:35. John Gwillim ran 39:20, which although didn’t earn him a standard, would have been good enough for one had he been running the race in a month’s time, after his next milestone birthday. Charlie Keitch ran a course PB of 30:52.

Making a come back from injury, Chusa Bautista-Fructuoso was loosely paced by Lee Clarkson (with Lee reportedly telling her to ‘get a move on and keep up if you can’). Lee finished in 38:23, with Chusa not far behind in 38:54. Chusa’s time earned her a place in the club champs. Fresh as daisies from their marathon efforts the day before were Anna Mills (50:25) and Meera Rajoo-Oakley (37:37). Also competing were several club legends who we don’t get to see as often as we would like in Keith Scrivener (1:37:08), Meryl Scrivener (1:37:09) and Michael Sommerlad (1:20:04).

Bentley blue at the Wix 5

Sunday morning also hosted the inaugural Birmingham International Marathon. Part of the Great Run Series, the event started at the Alexander Stadium and ran past many of the city’s landmarks before finishing in the city centre. Andy Stephens completed the 26.2 mile course in 3:59:19. This was andy’s ninth marathon of the year. His tenth and final marathon of 2017 is scheduled for this coming Saturday.

After satisfying Janice’s running needs on Saturday morning, on Sunday Ben Ficken headed to Suffolk alone to take part in the ‘Boss Hog’ obstacle race. The event’s website guarantees ‘lots of obstacles, lots of mud and lots of water.’ Ben wasn’t disappointed, saying: ‘the ditches (there were many) contained a lot of water and stinky mud. The water was neck deep on me in places and smelled awful. The obstacles had been added to compared to previous years.’ Ben completed the 8 mile route, complete with its monkey bars, plastic pipes for crawling through, nets for climbing under, hay bales for  climbing over and ditches of water and stinky mud in 1:00:59, finishing in third place.