The weekends races started early, or is that late, I dunno Caroline Searle is in Australia posting stuff at times that just don’t make sense! Anyway, what we do know is that she ran the Alice Springs 10k race this week that started in cooler conditions before the sun came up and then became hot and windy as the sun rose. She finished 29th out of 76 starters and 16th female in a very good time if 57:22. Back in old Blighty the Ipswich 5k and 10k races got the weekend off to a busy start on Friday evening.

[Caroline Searle at the start of the Alice Springs 10k]

To enter the 5k you needed to post a 5k time of less than 20 minutes so our representative was Charlie Keitch who admitted to being a bit apprehensive as the 3 fastest runners times were read out as the runners lined up for the start of the race. Keitch ran his fastest time this year as a result posting a very quick 18:49. The 10k race followed the 5k with 13 blue vests toeing the line for this, including Charlie Keitch. Keitch was “taking this one easy” following his 5k race and this was clear to see in his finishing time of 41:01!

It was round 4 of the hotly contested Great Bentley (Rodger) Trail runs this Sunday with what was planned to be a 13 mile run. Charlie Keitch (yes that man again) was looking at a good finish to retain his trail run champion tag, after completing the course Keitch studied his Garmin and found that he had run 12.8 miles.  Now we all know that Garmin’s (there are other manufacturers available) can be a bit temperamental however, after studying the instructions and have a discussion with Rodger it seems that Keitch took a wrong turn and didn’t complete the whole course and as such his time wasn’t valid. At the time of writing the full results aren’t in but there is a rumour that Mark Crittenden has taken another wrong turn and the coastguard are out in their helicopter trying to locate him!  As always it looks like this was great fun for all involved and another big thank you is required for Rodger Alexander and his able assistant Eric Shaw in getting these runs planned, tested, timed and run. 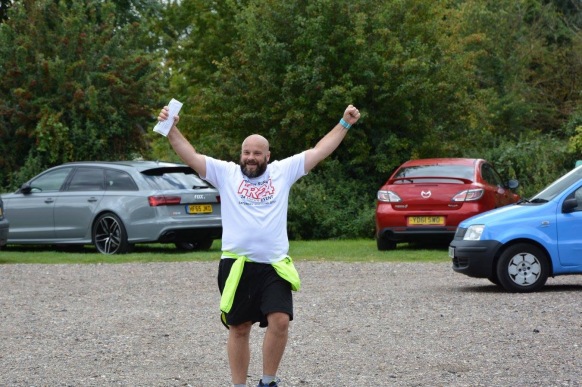 Sunday also saw a variety of distances to run over at Clacton, Colin Farmer was the only blue vest to take on the half marathon distance finishing in a very swift 1:38:51. Chusa Batis and Lee Clarkson blew away the cobwebs after a while off racing completing the 10k in 52:27 and 49:17 respectively. Leading our runners home was Ray Baggs (41:36) with Mark Ross (50:27) and Heather England (1:07:09) also completing the course run on the promenade. Rebecca England and Brenda Jackson ran the one mile race finishing in about 8 minutes and 10 seconds.

As usual we had plenty of runners at various parkruns; the most impressive tourism this week was undertaken by Andy Stephens who ran the 5k at Bloemfontein in 23:43. Also venturing out of the county were Matt and Liz Jones who took on the tricky course at Peacehaven Matt finishing in 21:49 and Liz in 34:32. Kieran Willey ran the Pendle parkrun posting a finishing time of 27:32.

Around the county this week saw just Luke Groves at the country park in Mersea finishing in 29:06.  Ben Finken and his able canine companion Janice ran the prom at Hawich in 20:02 this week along with Toni Wilson who finished in 23:13.  Colchester Castle saw 414 runners this week and  a new course trialled which caused controversy as you start in the opposite direction and this man for one doesn’t like change!  Anyway, making light of this was Meera Rajoo-Oakley who finished in 22:30 with Anna Mills hot on her heels (22:40) followed by James McCullugh (25:02) and Nicholas Goodwin (25:20).  The Young/Keitch clan ran together this week in an attempt at getting Scott’s daughter Beth a new PB which with a result of over 2 minutes off her previous best and her first run under 30 minutes was highly successful.  Leading them home was Claudia Keitch (28:03) followed by Charlie with Cassius in his buggy (28:05) with Scott and Beth Young following home in 28:19.