So its spring and the midweek 5k series are now in full swing with Harwich and Maldon being popular haunts for our blue vests this week.  The Harwich 5k is a handicap race similar to our very own Micky Edwards with the slower runners leading off first and the faster ones afterwards, the aim is that everyone should cross the line together.  Tuesday saw 17 of our runners out at Harwich running the PB perfect promenade route.  Vicki Law ran a bronze standard time of 26:52 with Louise Upston also posting a PB of 27:17.  Ray Baggs recorded the fastest time from our group speeding home in 19:32 followed closely by Rich Moor (20:11) and Colin Farmer (20:58).  Brian Telford continues to put in strong performances recording 23:03, Graham Clarke (22:25), Frank Gardiner (23:39), Paul Blackwell (26:27), Peter Reeve (33:34), Stuart Baggs (33:37) and Dave Nugent (42:47) completed our male contingent.  For the ladies Anna Lyon (25:05) ran a strong 5k with Belinda Palmer-Barnes (28:16), Sue Wright (30:48), Emma Levett-Welham (35:38) and Rita Page (38:22) all setting their targets for race number 2.

Over at Maldon on Thursday it was the second race in their series with Sam Godden finishing as the second female in a speedy 20:42, Lee Clarkson 21:13, Kevin Stevens 21:13 and Luke Groves 23:55 completed our line up.

The weekend saw the Colchester 10k race being a popular event for our runners, the day started off with rain which quickly cleared to a nice clear and relatively hot one which saw some cracking runs from our runners.  Paul Connell ran his first 10k race and finished in a very quick 42:28 and a Silver Standard, Luke Groves ran a Personal Best of about two minutes and broke that elusive 50 minute barrier finishing in 49:50. Following on from his excellent marathon at Halstead Paul Davison put that training to good effect finishing in 39:34 and a Silver Standard closely followed by Rich Moor (42:22) and Charlie Keitch (who was running without the buggy and son Cassius today) (44:27) pacing to 45 minutes .  Lee Clarkson (49:52) had paced Groves and others trying to break that 50 minute barrier around the course with Neil Robins also running a PB in 54:25, Darren Willey (55:32) and Jack Wicks (1:04:20) also had good runs. John Ferdinand smashed his PB taking a whooping 9 minutes of his previous best finishing in 1:05:12 with a sub-60 minute finish his next target. 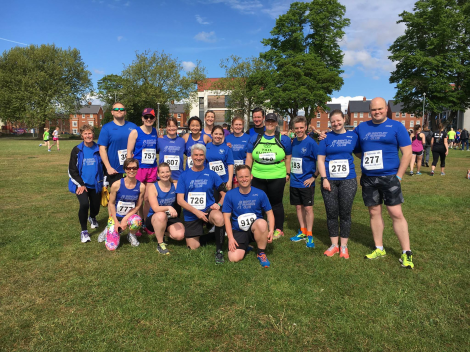 Also on Sunday John Bush and Belinda Palmer-Barnes went over to Woodbridge for their 10k event.  This is always a very good run which is two laps around the town which includes a killer hill just to add to the challenge.  Bush finished in 1:09:29 and Palmer-Barnes in 59:06.

A 10k of a different type, that being the Cross Country variety, was run on Saturday at Hylans House by Meera Rajoo-Oakley, feeling the need to try harder, whilst still recording a pretty decent time of 48:09.  She was accompanied by Frank Gardiner who also recorded a very good time finishing in 53:25.

Before I get onto the Saturday ritual of parkrunning we had a some serious racers over in sunny Florida, of course what is there better to do when on holiday in the sun than to show the locals how you should run 5k?  So with this in mind Paul Hollidge and debs Cubberley put on their vests and trainers and on Saturday did the Flavor Run at Bill Frederick Lake which saw them get covered in dye whilst running the 5k in a “watch” time of 25:36.  Using that as a warm up Debs Cubberley took on the Girlz on Fire 5k on Sunday and only recording a PB with a time of 25:13 being good enough to finish 9th overall! 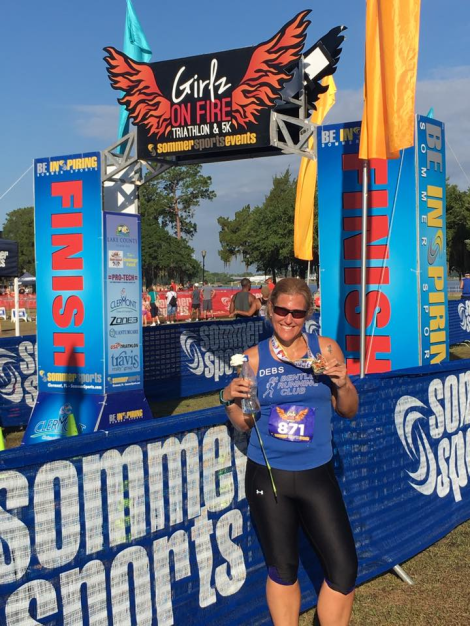 So parkrun time and over at Clacton on Saturday saw a great run from William Thorpe who ran round with dad Rob and recorded a massive PB of 24:23, it looked like he had plenty more to give too so maybe more to come there. Dave Goldsmith led the blues home in (19:14) with another strong Ray Baggs run close behind (19:54). Patrick Reynolds (21:15), Scott Young (23:07), Brian Telford (23:48) and Kevin James (24:23) all enjoyed some early morning coastal sun.  For the ladies Davina Swindell warmed up for Colchester the following day (32:43) and Sandra James (36:04) also enjoyed the promenade run.

Well done everyone some great results again this week!