The GBRC juniors were also out on Sunday at Alton Water they completed a treasure hunt around the reservoir whilst their parents were out getting lost!  It looked like they had a great time under the watchful eye of Linzi Iddon. It would be great to see more of the juniors out at the next event, there’s plenty for them to do and they have access to the cake long before the adults get back. 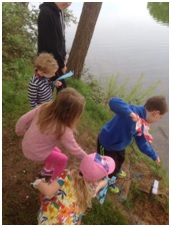 Sunday also saw the running of the tough Paras 10 which is an off road event with plenty of obstacles to overcome now in its 5th year.  Ben Ficken completed the course in 1:09:37 and was 12th overall, not to be outdone Chusa Batiss was the 11th lady across the line in 1:25:55.  Others running the 10 mile course were Lee Clarkson (1:24:50), Anthea Colsell (1:32:41), John Bush (1:54:14) this is a magnificent 12 and a half minute improvement on John’s time when the event was last run in November and Helene Tyler (1:54:15).  Debs Cubberley and Paul Hollidge undertook some cani-cross and ran the course with Tillie and Lucie in 1:51:15.

Simon Miller ploughed a lone blue furrow at the Great Baddow 10 completing the tough undulating course in 1:13:15. Also on Sunday Matt Jones took part in an untimed Heroes Run v Villains Run on Hove seafront which saw Matt dressed as Captain America, his wife was the American Dream and his two eldest children Hawkeye and The Riddler.  The kids did the 500m dash whilst Matt and his wife did the 10k in an unofficial time of 1:03:27 thanks to Garmin! The proceeds went to Pass It On Africa – a charity raising money to build schools in some of the poorest parts of Africa. Sunday’s run raised money for the development of a primary school in Uganda. 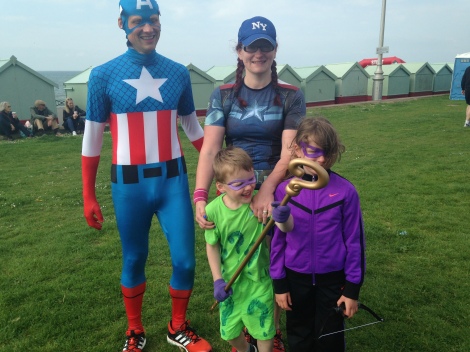 So to Saturday’s events and the usual pilgrimage to the local Parkrun events which saw Harwich playing host to Malcolm Jarvis completing his 100th Parkrun which is a fantastic achievement he completed the course in a cracking 21:13 – well done Malcolm.  Harwich also saw Jack Wicks knock 26 seconds off his previous best time over the 5k distance finishing in 24:20, there were also 3 course PB’s Patrick Reynolds who led the 7 Bentley runners home in 20:46, Kevin James (22:28) and John Bush (29:09).  Other runners at Harwich were Toni Wilson (24:32) and Sandra James (32:18). 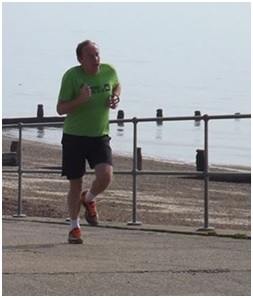 This week’s Parkrun tourism saw Matt Jones head down to Eastbourne with a sub 22 minute target in mind, Matt then went on to record a time of 22:01 on the grassy track leaving him slightly disappointed that he missed his target by a couple of seconds but on reflection happy that he’d run his second fastest time ever over the distance.  Our Parkrun round-up won’t be complete with mention of Colchester Castle which saw our very own Meera Rajoo-Oakley as Race director overseeing a record turnout of 413 runners!  Of these we had 11 runners taking the challenge of castle park hill twice with Charlie Keitch the first runner home in 19:35 followed closely by Gary Parker who was running this for the first time (19:40).  Katy O’Leary ran a course PB of 24:56 our 8 other runners were Ben Ficken (21:24), Scott Young (23:48), Caroline Searle (27:28), DebsCubberley (28:10), Paul Hollidge (28:13), Claudia Keitch (28:34), Andy Stephens (30:36) and Robert Thorpe (33:33).

Finally, Rebecca Conran headed out into the wilds of Essex to take part in the Essex Cross Country Series at Hylands Park in Chelmsford finishing the course in 1:02:36.