A happy new year to you all

Sadly it starts with the resignation of Captain Clive, he may not of held the role for long, but personally has been a captain to me for many a year now, what he has achieved is inspiring enough, but add to that the knowledge he has shared, and the self belief he has given me, taking my running to a level I could not have imagined, he will always be my captain and I urge any of you looking for honest advice on improving to talk to Clive Thomas.

The racing calendar kicked off with  the Essex Cross Country championships, where the mud loving Charlie Keitch as a our sole blue vest finished in 103rd place, he wasn’t finished there though, as this time with Ben Ficken joining him at the Southern Cross Country championships in Brighton they both navigated a tough hilly 9 miler, Ben finished inside the top 500 and but for cramp I’m sure Charlie would have joined him.

With XC in mind it was Ipswich turn to host and with 27 men out in force, battling the wind, we finished in 4th place and now that Springfield have confirmed Hylands park is cancelled, this leaves us overall in 5th with one to go and safe for another year in pool A.

It was great to see newcomers to XC in Luke Groves and Martin West, and continued positioning improvements from both Darren Horner and John Booty, in the juniors our regular young troops, Michael, Harrison, and Ben were joined by Oliver Hill starting he’s 1st race and judging by his smile he loved it!

Just one more to go now, so if you can make it to Hadleigh I’ll see you there, and don’t forget the  XC meal, March 7th at Chiquito’s in Stanway , please let me know asap if you can attend ill be sending out a menu order to all soon.

In other events this month Ben was joined by Patrick Reynolds, Michael Clark and John Booty at the tough Benfleet 15, not to be out done Luke Groves, hit the winter  trail half in Wales, Ade Cherry got a new pb at the olympic park 10k, Frank Gardiner achieved a bronze standard at Folksworth 15,  John Bush  took on the Hadleigh  10k and also received a  Bronze standard at the Colchester Park run, so well done to you guys.

Talking of park run congratulations to Russ Sharp for winning the Colchester  event in under 18 minutes at his 9th attempt, a few 2nd’s and 3rd’s and a few injuries over the last 18 months, but he works hard to keep fit and its great to see him returning to near his best.

Some alterations to training will commence in February, the committee have approved a new 8 week rolling plan set by Darren and Toni, the aim will be to provide specific training for all, based around the racing calendar. There is no change in the days we train, the new addition is the tempo run on Friday’s during the winter. With the club increasing in size, safety concerns have been raised, regarding the numbers that one running leader is expected to control, So in keeping with EA regulations  we shall split into smaller groups, with specific pacers to run for longer and give our weekly schedule an added variety.

Finally to runner of the month, this guy is almost twice my height and when he see’s the finish line has the speed of a gazelle to take down those around him, he has improved he’s position in every XC race this season, scoring for the club for the 1st time at Harwich, and improved to 7th Bentley man at Ipswich, he then went on to take 9 minutes off he’s time from last year at Benfleet ducking under 2 hours. He like many of you has had to overcome injuries, but is now looking stronger than ever, so congratulations to John Booty my runner of the month. 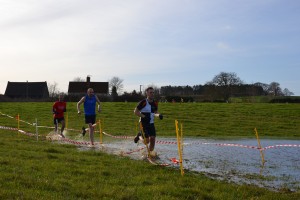 Whatever  your goal is this year from 5k to a marathon or even  7,  now is the time to believe in yourself and you will succeed, keep a focused mind, a smile on your face  and enjoy being a runner.