As promised Sunday proved to be yet another challenging, but enjoyable trek across the Essex/Suffolk Countryside. As we entered the car park at Rodbridge, Long Melford we were greeted by Rodger and a medieval sized table full of food and drink. After collecting our instructions and prising ourselves away from the banana cake and coffee, we headed out. The first part of the course was on road, so we settled in to the run nicely whilst enjoying the cooler weather. The instructions were easy to follow as we negotiated our way through brambles, nettles, fields (home to some scary looking cows!) and across numerous stiles and bridges. Around mid-morning the sun broke through which made the course even tougher. We were relieved to get to the second page of instructions, because it meant that we were half way and Rodger had been kind enough to put out water at certain points. Once hydrated we carried on with the job in hand, which was to make it back before all the cake had been eaten! After a few wrong turns and lengthy discussion about who was going to read the instructions to get us back in one piece, we eventually spotted the familiar bridge signalling that we had made it around the 10-11 mile (country miles according to Rodger – actually 13 give or take) course. There was enough food and drink to feed the Waltons! Thanks to Rodger Alexander for once again doing a cracking job of organising the series. 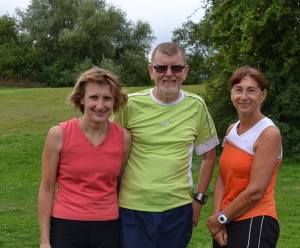 Results for this leg are: