Well, hello there and let me start by wishing you all a very Happy New Year. A year no doubt full of new year resolutions – some to break, some to keep. It seems that running was one of those you plan to keep because the year was merely a few hours old and you all seemed to have descended en masse onto nearby parkruns. Ah! The appeal of New Year’s Day – the only time of the year when one can run two parkruns due to the altered starting times. So let’s get started with those doubles, shall we?

Colchester Castle Park (CCPR as is affectionately known by at least me) kept its 9.00 starting time and proved to be a popular choice to start the day for many blue vests who then migrated to Highwoods on time for a 10:30 start. Dave Jones took both runs in a relaxed manner with times of 30:11 and 31:05 respectively. Anthea Colsell ran to CCPR and completed it in 27:58. She then got a lift (and a new pair of trainers) to Highwoods and ran again, this time in 28:26. Magdalena Komorowska was 1st in her age category and 8th female in CCPR with a time of 25:01. She then repeated the 1st age category position and improved her female position to 7th in Highwoods. Great consistency Mags! Charlie Keith did a very special CCPR-Highwoods double as they were his 149th and 150th parkruns. He started with 7th place at a speedy 19:54 and then went onto finishing 9th in 20:09, which is a Highwoods course PB. Hélène Tyler also doubled finishing at Highwoods but she started at Harwich with Bella the pooch with a bronze-standard finishing time of 29:13. Highwoods saw Hélène  and a very tired Bella finish in 34:08.

North of the border, the county border that is, Martin Owen started in Kesgrave with a time of 25:22 and then headed to the coast along with 887! other runners to take part in Felixstowe parkrun with a finishing time of 25:06 and reporting that the course is very flat but insanely crowded on that day.  Also in Suffolk was Rob Dyer who must have put a poker face and said “I see your double and I raise you a tripple!” He got started at 8:30 with Ipswich parkrun, which he ran in 23:55. He then hurried to Kesgrave where he played a game of “catch the tail runner” for an official finishing time of 37:52. Not happy with that he also headed to the seaside to finish off his running amongst the insane crowds of Felixstowe in 23:12. What can I say, Rob, you did a hat trick. Chapeau!

But it was not all about the doubles on New Year’s Day. At CCPR Marion Simmonds ran  in 29:29 and finished third in her age category. Also at CCPR was Emma Wakeling, who ran with her children Lacy and Brody. Lacy really struggled with the cold to the point that she had to borrow her brother’s coat and was wearing two pairs of gloves. But she finished. Brody on the other hand ran much faster than he had previously done, this being his second 5k run, and even managed a sprint finish.

At Highwoods John Booty was first dog and seventh human with a time of 19:44. Caroline Searle struggled without trail shoes and finished in 32:29. Do as coach says and not as she does 🙂 Someone who didn’t struggle was Holly Colsell, who got a PB with at time of 30:12.

At Clacton Poppy Welham ran her first parkrun with mum Emma Levett-Welham. Well done Poppy! I hope you enjoyed it and go back for more. Bev Shortley also had a first in Clacton … a first parkrun in a while that is. She completed the course along the promenade in 26:45.

CCPR/Highwoods parkrunners
Let’s stay on the seaside but move onto Harwich where Justine Sheekey had an amazing run: not only did she achieve a PB, she also managed a sub-21 (20:41), a gold standard and a place in the Top-10 Bentley performance hall of fame. Oh! and she was first lady.  Also in Harwich was Eric Shaw who, finishing in 31:49, got a post-op PB and is firmly set on the road to recovery. Finally, Anna Young decided to tab the event because waking up early on a bank holiday is not bad enough. She got round in 33:49.

Well, I’m out of breath just writing this and it turns out that was only Wednesday! Saturday started with the “regular” parkrun and it seems some of you just can’t get enough of 5k runs-not-races in your lives! Justine was at it again in Harwich finishing first lady in 21:44. Martin was also in Harwich for a relaxed 25:58 run.  Another one adding on the parkruns was Hélène who ran a parkrun PB in Highwoods with Bella in 32:55, finishing third in her age category despite struggling up the last hill. Danny Draper admits that he didn’t run much over the Christmas and New Year’s period (you and me both!) so he was quite pleased with his third place at Highwoods with a time of 22:14. over the Strood at Mersea Island Janine Simpson ran with sparrow-leg Ella who achieved a parkrun PB with 36:14 as well as finishing first in her age category and grabbing a space in the junior club champs. Whoop whoop Ella!

But this is not all the action from Saturday, oh no! Over in that little place by the Thames called London Charlie Keitch and Scott Young took part in the Victoria Park half Marathon which consisted on six and a half laps of said park. Charlie’s time was 1:28:27 and he looked good for an even faster time when disaster struck in the final half mile in the form of a cramp. In any case his time is good enough to get him a club champs so he isn’t complaining. Scott had initially planned to run the half with his lad Sam, who is training for London marathon, but illness prevented the youngster from taking part so Scott set off alone but at too quick a pace and paid the price from mile 10, when his pace dropped considerably. Still, a time of 1:49:19 is not to be sniffed at and is also good enough for the current club champs. 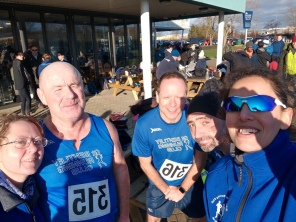 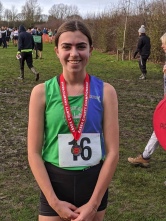 A 25% blue Milly
Sunday should have been the day of rest but it seems it wasn’t so for Tomasz, Neil and all the other GBRC runners who took part in the Stansted Stagger, a friendly event greatly organised with a route of just under 26 miles.  Sunday also marked the return to exercise of yours truly. After the fiasco that was organising my 100th parkrun for NYD only to have to cancel it (my own run, clearly parkrun went on ahead without me) due to being exorcist-style sick I took part in the Pukka Challenge, a 5k obstacle run which was more fun than speedy.

Some of the Stansted Stagger Crew

Well, in my best Buggs Bunny impersonation that’s all for now folks! I hope you have enjoyed your first race report for 2020 and apologies for its length but if y’all keep running I’ll keep writing!