The holiday season did not stop the blues from running, with several helping keep the Bentley Blues in shape.

A first place for Adam Smith, with Craig Mitchell

Martin Owen was at the Banbury parkrun On Christmas Day, running with his sister, in 37:15.

Rob Dyer was back “home” at his regular Danish parkrun with 22:37 at Amagerfælled, and 7th place overall.

The annual Runners vs Riders race took place in Friday Woods. As has become the usual outcome, even in the muddy conditions the riders won the event, but by all accounts it was a cracking event. Bentley runners taking part were Vicky Presland, Phil Presland, Craig Mitchell, Rob Ferguson, Paul Carlisle, Russ Sharp. Some of our juniors took part as well – Connor Sharp and Charlie Sharp.

Sue Wright and Barbara ran this race hosted by Essex Trails. On a very muddy route, all was going well until the last mile for Sue and Barbara, but they then had to phone for more instructions, but this meant they clocked over 13 miles. Vicky Presland and Phil Presland also ran this race, clocking up 12.7 miles after also going a little awry. The roaring fire in the pub at the end was most welcomed.

Anna Young finished off her 2019 running on Saturday 28th with a tough little marathon – this was 4 laps multi-terrain, undulating & very slippery in places, several people losing shoes, but thankfully not Anna ! 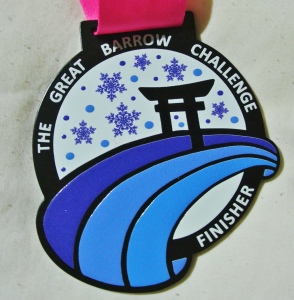 Nice medal for Anna from the Great Barrow challenge

Leoni Harvey travelled to Cambridge on Sunday 29th to run the Cambridge Christmas 10k. This race involved a nice run around the park with a few puddles. Leoni said she struggled with the extra xmas weight but ran an excellent time of 57:35. Despite all that effort Leoni was disappointed that the race did not have any Christmas medals for the runners.

Unfortunately a misplaced Marshall on the new course route meant a short distance ; nevertheless the conditions were nice, and we are grateful to all the volunteers at all these Park-runs. Times were Paul Connell 22:05, Scott Young 25:33, Russell Clarke, having felt a bit under the weather recently was pleased to be there 26:27, Claudia Keitch 27:22, Anthea Colsell, just missing the start (27:38), but caught up and was pleased to run 10 miles in total before after and including, an unwell Lee Clarkson 28:41, Teresa Farmer 28:57, Belinda Palmer-Barnes 31:31 and a buggy pushing Nick Goodman 34:55 .

Martin Stanwand was even further afield with parkrun tourism in Sicily at the Etna parkrun in Nicolosi. This was extra special for Martin, as it was his 50th parkrun milestone! Martin finished 4th overall in 22:35. Girlfriend Alex was not far behind in 6th with 23:01

Rob Ferguson got up to some festive parkrun touring on Christmas day tackling Parke prakrun. The rain meant a normally muddy course was extra muddy, and the field was brought to an almost standstill on the steep ‘bank’ 500m Rob defeated the conditions with a course PB of 22:25 and in 16th place.

Luke Groves was the sole representative, Luke finished in a time of 26:12

At Colchester Junior Park run, Angel Jasper was awarded for having completed her 100th Parkrun, at the previous weeks race on the 22nd . What a brilliant achievement Angel, congratulations ! Angel finished her 100th Parkrun in 7th place, and her 101st in 9th place in a time of 09:08 , in first female place. 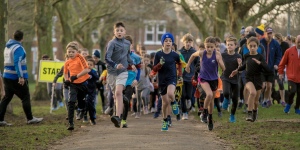 Sunday’s are now swimming rather than running for Bentley