So if Meera was late with the ladies newsletter then I’m not sure what I am, Greater Anglia performance probably!  Anyway apologies for anyone who has been waiting with baited breath for the newsletter.  Before we go on I have a second apology too, I’ve not lined up a victim for this months questions either – hey ho!

I would like to thank everyone at yesterdays cross country for the minutes’ silence we held to remember Darren Willey,  standing out at the front in the quiet was really moving.  I didn’t know Darren terribly well but I know many of you did, our thoughts are with his family and friends at this time.

We have seen another great month of running – a massive turnout at Wix with some exceptional runs with standards and PB’s gained by lots of you.  Well done to you if you were one of those who secured what you were looking for at Wix, it is always a good race, I must say that Harwich know how to put a race on.  With that in mind I must point out that they are holding their own half marathon in 2020 and also a 10k over at Bromley.  These will definitely be good events and will sell out and they will be as advertised and run on flat fast courses.

Cross country season has started and we had a really good turnout at Gosfield which bought an excellent result.  Well done to all who ran there it is a tough course but it is one of the best.  I’m writing this a day after our own race at Hilly Fields, I know that that was in November but I’d like to take this opportunity to thank everyone who made the event what it was marshals, kitchen helpers, car park attendants, result collectors, cake bakers and our runners – well done to you all.  The feedback we are getting from all the clubs is fantastic so I expect that we will be looking at a repeat next year.

As we put that race to bed, our 10 mile at Bromley comes looming up.  You’ll be seeing emails and Facebook posts about this soon but we know that Harwich are coming in force so we need our numbers out there – every runner counts.  I have the trophy safely obtained from Adam sat on the side at home, it would be great if we could retain it for another year.  The end of the month also sees our awards/Christmas do and if you aren’t on the list yet its not too late – make sure you let Mags know.  it was an excellent event last year and I’m looking forward to another good one this time around.

I would normally be introducing the questions victim now but I’ll crack straight on with runner of the month.  Once again there have been some exceptional performances from you all.  I’m going to mention just a few here that have caught my eye.  Ryan Day who has been training hard for the marathon, he showed that the hard work does pay off and how! a 2 hour 55 minute result – wow! Newcomer Jon Mann is putting in some great performances and also when forced to turnaround on the way to one race because of an road accident turned up at Gosfield just on the off chance that he could run the cross country and had a cracking run.  Dave Wright has had a couple of first place finishes at Parkrun and also runs consistently well at cross country whilst Tim Ballard just continues to be Tim Ballard.

However, both Paul and I agreed within one text who was runner of the month, he was in the mix last month after an excellent performance over in Cyprus.  This month he has just kept going with a first “proper” half marathon at the Colchester Stampede and a great time of 1:33 and he is now becoming a big part of our cross country scorers, well done to our runner of the month for October – Robin Oakley. 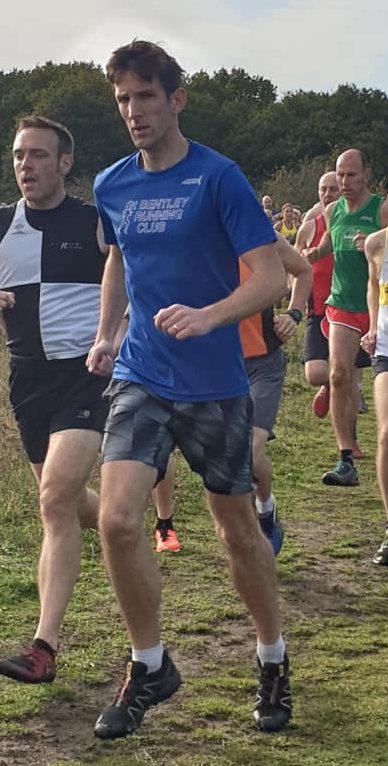