So here goes my first newsletter as men’s captain and what a month of running we’ve had. PB’s galore at various distances, the Virgin London Marathon, marathon debuts and Paul Blackwell closing in on 200 but more of all that later. Anyway, a few things of note to start with – subs these are due (or should I say overdue) if you haven’t paid your £25 please do so as soon as possible, this will give Nick the chance to get everyone registered with English Athletics and your EA number confirmed.

Next is Mickey Edwards, Luke is in the box seat for ME and these start on the 1st May so if you want to run please register with Luke before the race he’ll give you a number which you need to keep for the whole series so don’t throw it away after your run stick it in your car and bring it back. For those who haven’t done this before it’s a handicap race which means that the slower timed runners set off first and the fastest last with the plan being that everyone crosses the line together.  Obviously that doesn’t happen but what does is that your 5k time will (definitely will unless like me you do a reverse ME where your time gets slower each run!) get faster.  The more time you knock off you run the more points you earn, the only problem being that your new “faster” time is now your baseline and you have to run faster again to get more points. It’s a great event with prizes given out based on performance.  If you can’t run or would like to help out at all please let Luke know as we need marshalls around the course to make sure the run is safe. This first race is your baseline run so it will be a mass start and you set your 5k race for the remainder of the races to be set against.

The next trail run is on the 19th May at Brantham details are on the website this one is 5 Rodger miles and is the second in the series after a great start of 7 miles at Ramsey.  The first runners can go off at 8:45 and the postcode for meeting is CO11 1RF which is Brantham Village Hall.  If you’ve not done one of these before give them a go they are a great events and there is always the benefit of food afterwards!

Suffolk Trail Festival, this is the 24 hour race which takes place on the 15th June; it’s based in the countryside near Bury St Edmunds and after running the 10k last year I can say it is a great event.  We need a few more runners to complete a team (probably 2 or 3 more) the cost is £52 which includes camping and some snacks/tea/coffee etc. If you fancy giving it a go please let me know and I’ll get your name down.

Also it looks like Eric is ultra organised as ever and has already booked the coach for next years VLM so if you want in on that let Eric know.

Our Friday five race is starting to loom on the horizon; this takes place on the 5th July at 7.30pm.  As Race Director for this one it would be remiss of me not to mention it, we will need marshalls for the race so please keep the date in your diary as I will soon be writing out requesting your help.  As usual we will have runners in the race and these will be selected from those offering to marshall.  This race usually has the highest number of entrants as it is flat and fast and this year looks to be no different as there are more runners currently signed up to Bentley than any of the other races in the series.

The “thorny” issue of club standards was brought up at the AGM and was subsequently discussed at the next committee meeting.  There are inconsistencies within the standards with some of the variations between the levels being weird with some longer distances having to be run quicker each mile than some of the shorter ones.  The standards are based on average times of people around the country running the distance so really an average of averages – a bit like the % score you get on your parkrun time. Anyway, there was quite a lengthy discussion on this and (new chairman) Paul is going to email the members to get some thoughts on possible solutions so keep your eye out for that.

Paul my new VC and I were chatting about the newsletter and what you may find useful or interesting, one of his ideas (credit where it is due!) is to introduce a member of the committee to you each month as you may not know who is on the committee or even what they look like.  So to kick start this I suggested that Paul is the first off the rank:

Name: Paul Hollidge
Age: 50
Occupation: Skoda Service Advisor
Started running: 2007
Favourite running distance: Half Marathon
PB at this distance: 1:32:34 Bedford 2018
Claim to fame: Appeared in a music video and got paid for it!
Best running advice you ignored: Do on race day the same as on a training day! Ate porridge, toast, banana and loads of protein shakes before a GBRC half marathon…couldn’t eat for 2 days after as my stomach was such a mess!!
Celebrity you would like to have dinner with & why: Murray Walker, grew up with him commentating on formula one, he’s energetic, engaging, funny and an all round proper gentlemen!
Favourite cake: My favourite has always been coffee n walnut, but recently discovered Red Velvet!! Red Velvet just nicks it! 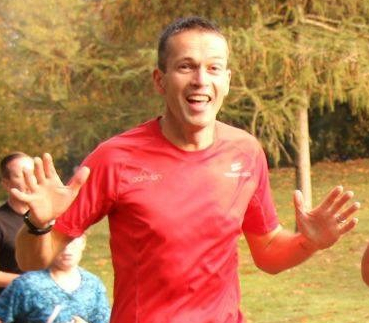 So to Runner of the Month and as I mentioned earlier this is a really tough one this month so thanks everyone for making month one an easy selection for Paul and I!  There have been so many notable runs this month so here are just a few of those that myself and Paul considered……Gary Hill 2 marathons in a month on his usual no preparation and the first at Manchester his second quickest ever; Frank Gardiner a silver for his half at Bungay, Mark Crittenden a 5 minute course PB along with PB’s for Neil Robins, Adam Smith (a silver too), myself and Kevin James (with a Gold standard into the bargain all at the Bromley 10k race.  Paul Carlisle and Rodger Alexander bounding around the 31 miles at the 3 Shires, the TiT (10 marathons in 10 days) that is Paul Blackwell, March’s runner of the month Tom Komorowski running his first marathon at Krakow, and a massive 15 minute PB for Luke Groves at the Virgin London marathon.

All amazing results well done to you all, however, both Paul and I agreed that there was one run that did standout even above these and that was Tim Ballard’s amazing sub 3 hour marathon at Manchester.  Tim not only finished in 2:56:34 but bagged 7th place on the all time GBRC marathon list, set a 15 minute PB and grabbed a silver standard.  He then followed this up the following week with a sub 40 minute finish at the Witchfinder 10k.  Absolutely fantastic running so well done this months runner of the month is Tim Ballard. 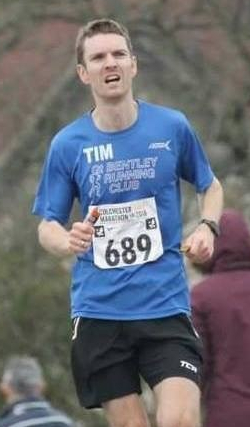 [Tim Ballard – Runner of the Month for April]