What a running week we have just had! The weather decided to cool down a notch, perhaps to keep us all on our toes, and Bentley runners were out in their droves pounding pavements and trails up and down the country and beyond!

Running events got to an early start on Tuesday 9th April with the 5k “I can Run” event being held in Christchurch Park, Ipswich. Anna Young ran her fastest 5k to date in 26:05 with her daughter Emma, who has been tempted into the blue side and will soon be wearing Bentley Blue. Paul Connell was also there, achieving a fantastic 6th position overall in 20:18. He was also first in his age category which meant he went home with a bottle of white wine as a reward for his efforts. 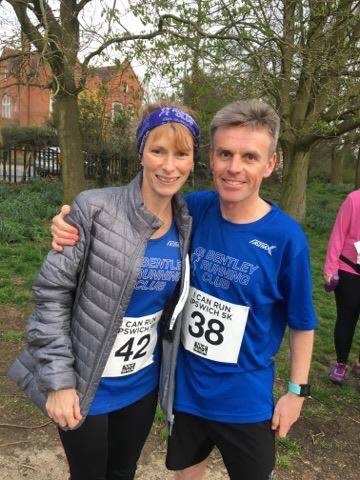 Paul and Anna in Ipswich

Saturday arrived and with it our beloved parkruns. At Mersea Island Lee Clarkson ran the course in 26:28 with a 16kg backpack as part of his training for Paras 10. Also by the seaside, James Royce ran Harwich parkrun in a PB time of 20:11 which earned him a silver standard. Anna Young ran with Caleb the dog for the first time and achieved her fastest time on that course so far this year with 27:33. Running with dogs seemed to be a theme as Craig Mitchell and his dogs were first finishers in Highwoods. With a PB-time of 17:58, Craig got a gold standard and I’d like to think his dogs got a good belly rub (or whatever other kind of cuddle they like, I won’t pretend to know anything about dogs). Also very pleased with their time in Highwoods were Vicky Presland, who completed the course in 23:11, a minute faster than her previous attempt, and Anthea Colsell, who in 25:05 ran her quickest parkrun since Krakow last October. Paul Connell improved on his Ipswich time finishing 3rd in 20:07. Emma Wakeling ran with her children Brody and Lacy on their first 5k run which they both completed in 39:49 despite a sprint finish race at the end. She herself ran her 49th parkrun in 39:53. I sense a milestone T-shirt coming her way soon! To round-up the parkrun report we head north of the wall, Hadrian’s Wall that is (no spoilers from me, fear not, and if you don’t know what I am talking about… shame!) where Charlie Keitch enjoyed a 9.30 am start at Lochend Woods parkrun. He described the course as twisty and on the blustery side and was third finisher with a time of 20:06.

Paul Blackwell started the Phoenix Challenge on Saturday with the Fortitude run consisting of 10 laps along the Thames towpath. He carried on Sunday with run 2 of 10, doing the same run but in reverse. Paul, have you not got any intention of tapering before London Marathon?

One for the medal lovers out there.

Speaking of marathons, the season is in full swing and on Sunday we had our very own Sue Wright running around the streets of Paris in beautiful weather. She found the course stunning and the event well-organised. She had to dig deep for the last 6 miles but she did it in a time of 5:27:17 and got a bronze standard for her efforts. Toutes nos felicitations, ma chère Sue!

Closer to home Gary Hill ran the very popular Brighton marathon. He ran a strong 15 miles initially and struggled after that, carrying on to complete the race in 5 hours 6 minutes.

Halving that distance we had Nicola Laverack in Frinton. The organisers seem to have ironed out the kinks of previous years and the course was the full 13.1 miles, which Nicola ran in a bronze-standard time of 2:08:11 despite having some troubles from mile 8.

In Bungay we had Mags Komorowska and Frank Gardiner, also running the half marathon distance. Mags was going to treat the race as marathon training for Krakow but got carried away – oops! She finished in 1:52:48 whilst Frank achieved a time of 1:56:33 which may have earned him a silver standard assuming he doesn’t already own one. I’m sure Eric will check that up for him. Speaking of which, I would like to take this opportunity to thank Eric for being the guardian of standards, always keeping track of our performances and taking the time to print all those certificates. Your printer may go on overdrive after this weekend!

Mags and Frank in Bungay 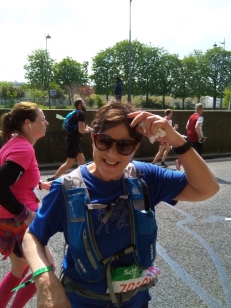 Sue in Paris oh là là!
Another local race raising money for local charities that took place at the weekend was the Witchfinder Trail, where finishers got a medal and a malt loaf, which I am sure will tempt some of us to enter the race next year. In the 5k distance we had Davina Swindell with Charlie. With a time of 26.46 she was first lady and Charlie was second dog in his first race after his second op. Well done Charlie! Over on the 10k race Tim Ballard decided that resting after running a PB-marathon is overrated and was second finisher in sub-40 by his watch. John Booty and his dogs were hot on Tim’s heels, finishing third in 41:54. And with a time of 44:48 James Royce completed the Bentley presence at that race. 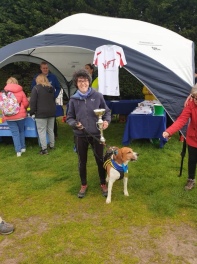 Davina and Charlie with trophy

Maltloaf and medal from Witchfinder 10k
Anna Young and daughter Emma were out and about again on Sunday. Anna donned some floppy ears for the Easter Bunny Fun Run in Thetford which was meant to be 5k but came a bit short on her watch. Never mind that, the important thing is that she enjoyed herself and was 2nd lady with a time of 25:01.

And now, ladies and gentlerunners, for the piece of resistance, I give you Little Bromley 10k, where over 30 Bentley blue tops decided to smash their PBs and keep Eric busy. Mark Crittenden decided that 5 minutes seemed like a reasonable amount to shave of his course PB and did just that finishing in 59:12. Emma Levett-Welham went a little bit further with 60:35 – 9 minutes less than last year. Zoe Reynolds loved the support on the route and from fellow Bentleys and achieved a 2 min distance PB with a time of 1:07:28. Bev Shortley continues running strongly with a chip to chip time of 50:26. Neil Robbins ran his fastest 10k time in 55:38 whilst Dave Jones achieved a bronze standard finishing the race in 50:42. Leoni Harvey didn’t want to be left behind and also achieved a bronze and a route PB in 55:39. Yet another PB and a standard were awarded to Sarah Davison who completed the race in 45:51 for a gold certificate. Emma Wakeling really enjoyed the course and came in at 52:58. Two gentlemen achieved their second fastest 10k time so far: Duncan James Scott with a time of 44:18 and Paul Connell, who also claimed a spot in the club champs after finishing in 38:31. Adam Smith was the first Bentley runner to complete the course in 37:28, earning a PB and silver standard for his efforts. And one more PB and place in the club champs goes to Eileen Shadford, who was 1st in her age category in 44:15. If you think this is all then think again because Eric has several more certificates to print. Craig Mitchell achieved a silver standard in 38:15 and Kevin James went for gold at 47:17. Two bronze standard awards go to Rob Ferguson (39:56) and Rich Moor (45:34). And last but by no means least we had not one but two diamond standards being awarded to Toni Wilson (50:07) and Fiona Gosling (53:02). 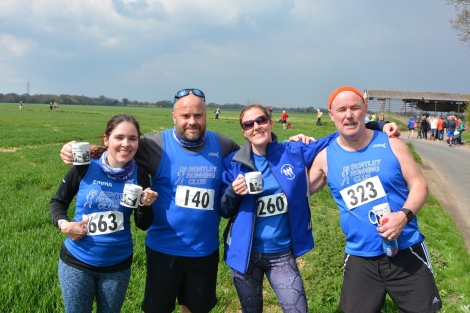 Very well done all of you! Can’t wait to see what you all get up to over the Easter Weekend!