Hello all. Last week the Sun was out a lot, and shone down brightly on the blue vests, particularly at Gosfield, near Halstead on Sunday, which was the 6th and final fixture of the NESS Cross Country 2018/19 league.

For the senior race, there was a marvellous turnout of blue vests, with 43 runners competing in the men’s and ladies races.

It was a new course, and despite marshaling issues meaning the race was in effect restarted after already having run almost 2 miles! it turned out to be a great event, and most seemed to really enjoy the course, in the muddy conditions, and with the hills thrown in.

It proved to be very worthwhile with the great turnout, as the men finished in 3rd place, ladies 5th, for a combined position of 3rd in pool A.

Most importantly, this secured Great Bentley their position in Pool A for next season, by finishing 4th out of Six teams, with 17 points. This was a stunning result for a small, social, and cake enjoying club like Great Bentley.

Individual scorers and positions in the race were as follows;

Our junior blues equally did us proud. Representing the girls were Evie Foster Leno Laverack, Angel Jasper Frank ie Laverack, Cienna Telford and Laci Wakeling. For the boys it was Fen Juller and Harry Booty.

Full results for the race, and information for any new to XC and in anticipation for next Winter can be found at http://www.nessxc.org.uk

Well, done everyone who took part in the XC challenge, some overcoming flu, aching legs, and general tiredness, but rewarded with a magnificent achievement at the end!

Shame the report author can’t say the same, but moving swiftly on… 🙄 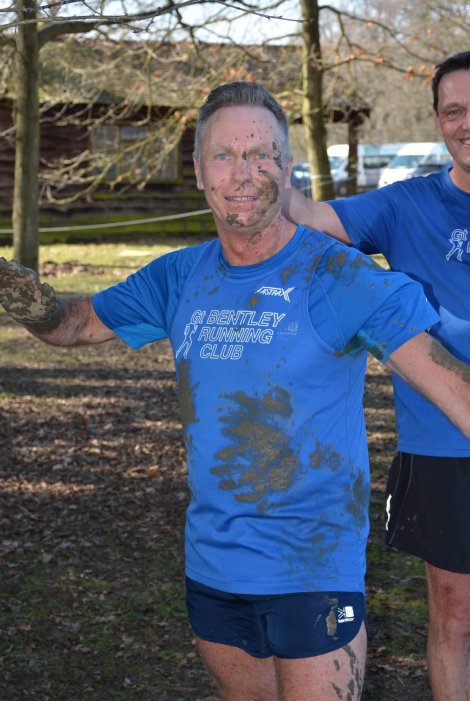 Also on the Sunday 17th, was the very first anniversary of the first Hare and Tortoise race event. This took place at the Flitch Way, a 15 mile stretch on a delightful disused old railway line between Braintree and Bishops Stortford. Several GBRC members took part in this challenge, where you could various distances.

Sue Wright completed a half marathon distance, 13.1m in a moving time 2.33, having wanted to do 18 miles, but a ‘brief interlude’ in a field watched by one man and his dog was a bit too much of a distraction. Not put off too much, Sue enjoyed the Lovely GBRC company. Helen Carey ran 16. 4 miles, and enjoyed the sun and seeing her fellow Bentley runners. Choosing the half marathon distance were Stephen Patrick Walsh, in 02:10:29, Mark Crittenden with 2:26:38 moving time. Emma Levett-Welham, covered 13.1 miles watch time 2.36. This was Number 3 of Emma’s 12 in 12 Half Marathon challenge. Emma said that it wasn’t easy at all on her legs on Sunday, but mind over matter saw her through it, well done Emma.

GBRC runners at the Hare and Tortoise

Meantime, back to the Saturday;Gemma Colling, getting in some early season fitness,tackled an impressive 51 or so miles of the Winter Poppyline race, which is run around the North Norfolk coastline. Gemma described the route as being mixed terrain, some good woodland trails,muddy fields,pebble beaches and some steps chucked in for good measure, and not as flat you might expect of the area !

There were some parkrun tourism for the Blues this week,

Southwark Parkrun entertained the Oakleys, with Meera running 23:09, and Robin with 20:47.

Clapham Common saw Rob Ferguson run an excellent 19:45, consistently running sub 20 5ks at the moment, just slightly put out that his pal ran off in the distance to finish in 17 minutes despite not training .. Fortunately he did not have his bar code so the records will say that Rob won the duel.

Our juniors opted for XC on Sunday at the weekend.

Well done all who ran last week, looks like you all had fun (of sorts) ! It’s been a GREAT week for GBRC. Keep safe and stay healthy..