Remembering was the theme of the week: starting with Guy Fawkes Night on Monday the 5th of November and culminating with several acts and events to commemorate the 100th anniversary of Armistice Day on Sunday 11th of November.

President Trump may have been (allegedly) too worried about getting his hair wet in France but rain has never stopped Bentley runners from turning up at events making the most of them. In Brightlingsea, Hare & Tortoise Running organised a Remembrance Day 100th Anniversary Race, offering participants a bespoke medal and a looped trail course of 6.55 miles (or 10.54km for those of a metric persuasion) and 6 hours in which to complete as many laps as desired. On the day the course was described as very windy, muddy and hilly, with a cold start but eventually the weather improved. Two Bentley runners took to the half marathon distance: Eric Shaw completing two laps in 2hr 22min 5s and Luke Groves, who finished in 2hr 22min 51s and enjoyed every second of it. Gemma Camp, Anthea Colsell and Toni Wilson opted for the three-lap option and run together finishing the 19.65 miles in 3hr 35min 56s.

Four Bentley runners made their way to Stebbing for a 10-mile race which also featured poppies in the medal. Participants descried the course as really nice and the event as very well organised. Paul Connell set off hoping to achieve a gold standard and for the first 6 miles it seems that he would achieve it but, alas! The wind was merciless and he missed the time but 34 seconds. However, finishing in 1hr 5min 34s he did achieve a silver standard, which I am sure you will all agree is not to be sniffed at, and also a PB, since this was the first time he had tackled the distance. Finishing together in 1hr 28min 51s  were Frank Gardiner and Magdalena Komorowska, who was glad that it stopped running before the race got underway, although found the head wind challenging in places. Also at Stebbing hiding under the colours of his tri-club was Ade Cherry who completed the course in 1h 21min 36s.

Paul, Mags and Frank showing off their lovely medals 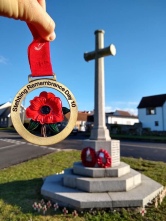 Also running on Remembrance Sunday was Anna Young at Scenic Seven, a race hosted by Stowmarket Striders. She was the single Bentley representative in this race which I personally like as I had a very good run back in those hazy pre-injury days. Anna found the course soggy, undulating and windy if very well organised.

On Saturday a group of intrepid Bentley adventurers took to the Peak District to complete the Six Dales Challenge. They walked, jogged and run a marathon on a challenging course up and down the hills with a total ascent of over 1,000 metres. The event was reported as great by all involved, with fabulous checkpoints and amazing scenery. Perhaps this is an outing to consider for those of you in search for a challenge.

What a week! And I have not even got into the parkruns yet!

This week we had a tie in respect of the parkrun with the highest number of blue shirts, with both Clacton Seafront and Colchester Castle parkruns coming in at 10 Bentley runners. Clacton hosted a reverse route and saw a determined Charlie Keitch setting for a gold-standard time of 18:20 but it wasn’t to be. At 18:57 he finished second after an 11-year old youngster which, in Charlie’s words, is one to watch. Ray Baggs was next crossing the line in 20:07. In close succession followed Rob Dyer (23:58), Kevin James (24:02) and Brain Telford (24:03). Other runners were Scott Young (28:06), Claudia Keitch (28:12), Peter Reeve (33:40), Sandra James (36:43) and closing the ranks as a tail runner Beverly Shortley (56:27).

At Colchester Castle Robert Ferguson was the first Bentley through the finish funnel in 20:03. He was followed by Lee Clarkson who achieved his fastest time since April with 21 minutes precise-Lee. Natalie Warriner was first Bentley lady to finish in 25:22 and was followed by Chusa (25:30), Russel Clarke (25:41), James McCullagh (25:52) and Stephanie Mills (26:55). Mags and Anthea were happily stretching their legs ahead of their respective Sunday runs and finished together in 27:35. Closing off the ranks at 31:38 was Paul Connell who was running with Tracey in what was her first ever parkrun. I’m sure it will be the first of many. 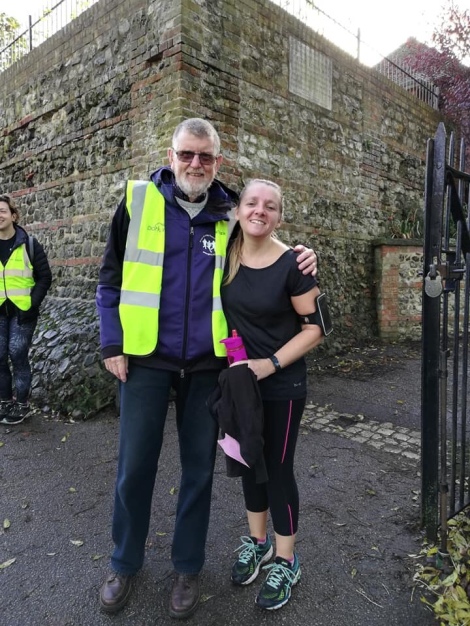 Superb marshal Eric with Tracey on her first parkrun.

Luke Groves was the sole blue shirt at Mersea Island finishing in 26:10. On parkrun tourism news (albeit not that far away) Rob Blackman was in Bury St Edmunds completing the 5k course in 20:04 and Debs and Paul Hollidge decided to visit Felixstowe parkrun and run the course in 27:19.

All training sessions and club events are cancelled until at least the end of April. Stay safe, keep well and we hope to be back and running soon!