Well, I think it is safe to say that we are having a glorious warm and sunny summer and, whilst conditions may not be ideal for running, Bentley runners were not deterred by the extra sunshine and sticky humidity and were out in numbers over several distances.

Wednesday is known as hump day by some but for us it was Micky Edwards day, with the last race of the series taking place that evening. Results for the last heat have been published on the website and on Facebook and I won’t bore you all by repeating them here, so go and have a look using the link below:

If the link doesn’t work, please blame Paul Carlisle, everybody else seems to blame him for one thing or another 😉

The overall series winners will be formally announced on Wednesday 25th July at the Geoff Day Memorial 5k event. This is a great club event and great opportunity to get together and I would totally recommend it to all members.

Friday saw a dozen Bentley Blues braving the heat to run the Brantham 5 Miles. Tim Ballard was the first club member to cross the finish line and he did so in 30:17. Finishing 9th with that fantastic time he not only earned a club champs spot but also a silver standard. Next to cross the line for Bentley was Colin Farmer in 34:47. He was followed by a lady who keeps running and running and manages to keep a smile on her face all the time: Magdalena Komorowska was 11th female in a time of 38:58. Frank Gardiner followed in 41:34. Leoni Harvey finished in a round 47:00 and reported her best time in nearly two years and, more importantly, that she felt good on the race. Other runners were Alison Clarke (47:55); Sue Wright (52:02) reporting her first run in a while, John Bush (52:28); Teresa Farmer and Hien Hoang both achieve a time of 52:31; Peter Reeve (56:29) and David Nugent (72:22). 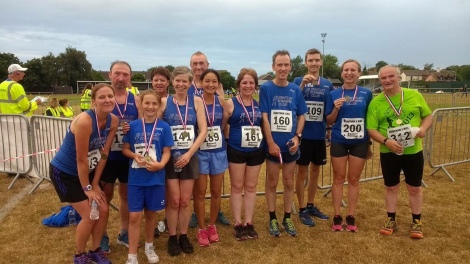 Saturday saw the beginning of the Glasgow to Edinburgh trek. Who in their right mind will attempt to walk 100 km in the height of summer? Why, no other than our very own Hélène-runs-in-the-desert-Tyler. Somehow she tricked her sister, Alison Lowe, to tackle the trek with her and they finished on Sunday sleep-deprived, shattered, with blisters, feeling tired but also fabulous. Well done ladies!

Closer to home, Caroline Searle took part in the Royal Parks Summer 10 km series in Regents Park. She completed the race in 1:00:03 and, although she didn’t enjoy the heat,  reported that the three-lap race was very well organised and was quite taken with the medal.

Caroline hiding behind her medal.

As always, our race report will not be complete without a mention to the several members taking part in parkruns all over the country. The 5 km distance is popular in the summer months and the local parkruns were well-attended. Jason Skelton was the first Bentley runner to complete Colchester Castle parkrun in 22:58. He was followed by Meera Rajoo-Oakley who went for a nice and steady run in 23:18. Andy Stephens was next in 25:40. Hot on his heels was Jake Darkins in 26:05. Russell Clarke and James McCullagh finished together in 27:36. After them came Scott Young in 28:27. Frank Gardiner and Stephanie Mills both recorded a time of 29:01. And closing the Bentley ranks was Claudia Keitch in 29:05.

Malcolm Jarvis was our representative at Harwich. He completed the race along the promenade in 21:26.

Mersea parkrun saw Paul Connel finish in 20:02. Ben #justiceforjanice Ficken followed in 22:42. Completing the blue shirt contingent were Tomasz Komorowski in 23:51 and Magdalena Komorowska who, despite finding it very hot, was 5th female witha  time of 24:23.

A little further afield, Bentley runners were on parkrun tour. Russ Sharp was second finisher in Thetford parkrun with a time of 18:26. Anna Mills ran 24:50 in Bedford and Nick Goodman 24:19 in Eastbourne. Rob Blackman and Paul Hollidge completed the 5,000 metres in Cambridge in 18:56 and 26:56 respectively. Meanwhile, the Preslands had made their way to Lowestoft where they visited the local parkrun. Milly was first to finish, albeit in a green vest, in 19:43. Vicky was next in 21:10. Phil was happy with a parkwalk in 28:55 and Katie closed in for the Preslands at 45:43.

Last, but by no means least, we have Sunday’s junior parkrun runners. Angel Jasper was out in Clacton and completed the run in a fantastic 9:59. In Colchester Yasmin Leek run in 16:13, no doubt chasing down her brother, Harrison Leek, who, also in a green vest,  was first finisher on 7:59. Another pair pf siblings, Brody and Laci Wakeling, also took part finishing in 15:15 and 12:59 respectively. Well done juniors!

Ah! All this writing about other people running has me wanting to lace up my trainers and go out running. What about you!?