Another summer scorcher week saw the Bentley Blues out shining in force.

On Friday one of the best events on the annual running calendar took place ; the amazing Great Bentley Friday 5 , including the junior 1k and 2k races. The races went brilliantly, with the club putting in a lot of incredibly hard work and organisation to ensure that the runners had a super experience. The feedback from the participant runners and the spectators taking part was excellent, they really appreciated the effort that was put in by all. 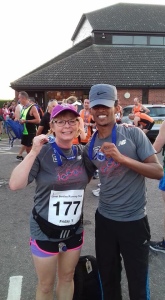 12 of our own blues represented the club at our home event. Charlie Keitch was first home in a brilliant (30:49), not quite a PB for Charlie, but his fastest 5 in four years, a club championship time, so a great effort and great form shown ready for his imminent Race to the Stones race. Ladies club captain Meera Rajoo-Oakley led the Blue ladies with a super time of (35:27) , Meera’s second fastest 5 miler. Paul Hollidge ran a new PB in (33:52) earning a silver standard to boot. Magdalena Komorowska , who ran all the Friday 5 series this year, saved her best till the last with a brilliant PB time of (37:24), a club championship time also. Frank Gardiner continued his impressive Friday 5 consistency with (39:52). Trish Jarvis ran (41:02), Christina Foreman finished with (45:29) Martin West was a quick (45:38) as was Alison Clarke (47:23). Claire Poole finished with (50:20) . Colin Farmer ran a super time of (33:52), with Theresa Farmer continuing to impress with an excellent (50:42).

Well done all to all of our runners who took part. Full Friday 5 results for the series can be checked out on the Friday 5 website.

Saturday morning saw the annual Long Brew Summer Stumble- a 10 mile route, starting at the Black Buoy in Wivenhoe. This race involved alcohol as the name implies, with a drink at the start, round along the trail to Rowhedge turnaround point for another drink, then back to the Black Buoy for a final flourish drink at the finish. Enjoying the fun and necessary fluid intake were club members Anna Young, Caroline Searle , Magdalena Komorowska, Tomasz Komorowski, James Carter, Rob Blackman, and Ben Ficken who finished 4th in 1 hour 18 minutes. Eric Shaw deserves a mention for helping with the marshalling and hosepipe duties on a very hot day.

(Some of our Stumblers on Saturday at the Long Brew race)

Also on Saturday, John Booty took part in the official SAS Fan dance – 24km and 3400ft of accent up and around Pen Y Fan, the highest peak in South Wales, in the Brecon Beacons National Park – weighted down by boots and 20+kg Bergan – which really made things tough, as well as the hot weather. The event is run by ex SAS soldiers . John finished in 4hrs 51min of absolute suffering, but thought it was a great event. No medal just a patch as a reward for completing.

This is advertised as a fast flat road course in Essex, through pleasant countryside on quiet lanes, run by Grange Farm and Dunmow Runners. It is a popular event, and celebrated it’s 20th anniversary this year. In the very hot conditions,seven blues ventured out on the course – and discovered that it was in fact rather undulating, with a long uphill on the 9th KM. In super hot conditions on the Sunday morning, chip times for the Bentley blues were Paul Hollidge (44:34) a PB by 32 seconds, but the hot conditions restricting Paul’s silver standard aspirations. Magdalena Komorowska clocked her second best 10k time with (50:38) , Scott Young ran a personal worst with (51:42) the heat and hills dictating, Hien Hoang ran (53:44), Leoni Harvey (1:08:08), Belinda Palmer-Barnes (1:08:33) and John Bush (1:10:27). Despite the heat, the great medal at the end made it worthwhile. 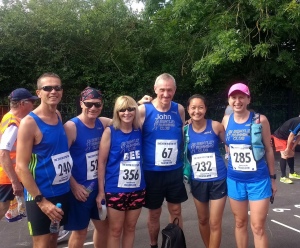 (Bentley blues out in force in Felsted)

Mark Crittenden, Anna Young and Paul Connell took in this new 10k race. It was a charity run, with a 10k or 5k option, but without chip timing. It was a nice course around Brightlingsea, but could have done with a couple more Marshall’s at critical points. Mark described it as his hottest run ever, Anna Young ran in 51:59 (helped by missing a little chunk where a Marshall should have been), and Paul Connell finished in first place with a time of (38:01) by his watch, with his watch recording the distance as 5.8 miles. It was a nice friendly run, well supported, included a run along the prom, with good water stations to cope with the heat, and a family atmosphere, and one to look out for next year if it becomes an annual event.

(Anna, Paul and Mark with some famous faces at the Brightlingsea 10k)

Ipswich Park Run (264 runners) . Tim Ballard took on the mostly grass course for the first time, finishing in 6th place and Ist in his age category with (19:24).

Mulbarton Park run (101 runners). Luke Groves took part in some park run tourism whist on holiday , running this course which is 3.75 laps of the village common. Again, it was super hot, and the lack of shade meant Meatball had to concede defeat after 2.5 laps. Luke carried on to finish in (25:45).

Mersey Island parkrun around the coast saw Kathy Bishop run an impressive (23:49) for 3rd female, and Matthew Jones with a solid performance in (22:30),.

Rubbenbruchsee parkrun (25 runners) . Kieron Hayes took part in parkrun tourism with this run in Germany, finishing with a time of (25:32).

Clacton saw Angel Jasper continue her fine form with a time of 09:44 and 3rd place overall.