We are definitely not being contained by this hot weather in our sun soaked corner of Essex. I have a complied a list of races completed this week that range from 5k to marathon.

First up this week is Paul Blackwell, he has added four new medals to his growing collection of marathon medals. He is very close to his 150th. He ran 4 marathons in 4 days as part of the Great Barrow 10 in 10 challenge. Now in its 10th year each morning brings with it a different route with a distinct ribbon attached to the medal for that day. Paul reported it to be a tad warm but a good way to blow the cobwebs away. 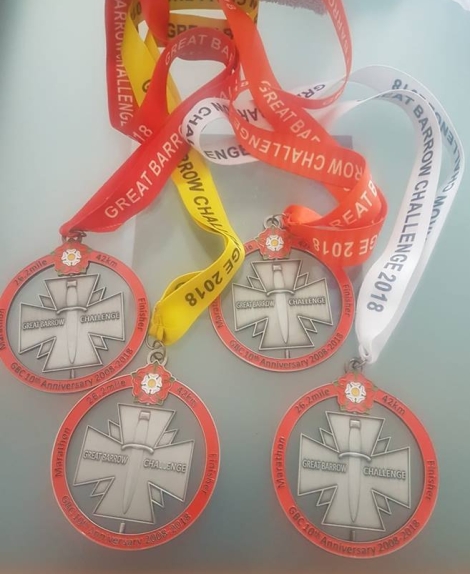 The Friday 5 series is hurtling towards the finishing line at Great Bentley Village Hall. The penultimate one took place in Stowmarket hosted by Stowmarket Striders. Anyone with an insider’s view of the medal would have had knowledge of the course as it was shaped as the outline of the route.We had six runners here this week, with a special mention to Frank who has taken part in all of them so far. First Bentley Blue to cross the line was Charlie Keitch in 30:57. First lady home for us was Meera Rajoo-Oakley in 36:15. Magdalena Komorowska ran in 38:01, Hien Hoang in 39:34, Frank Gardiner in 40:42 and John Bush in 51:04. 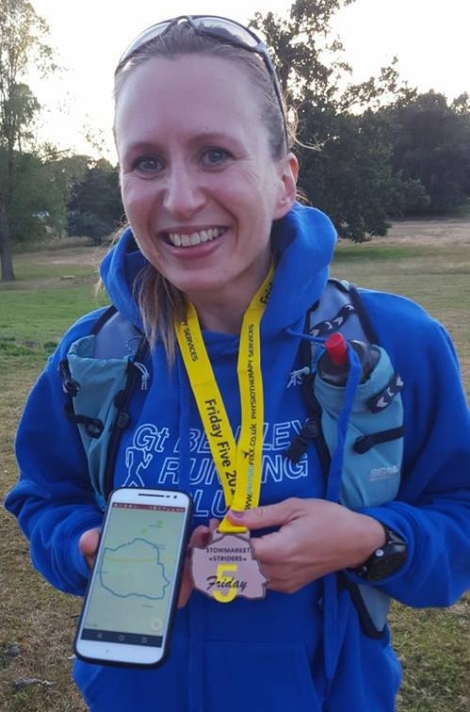 Magdalena with proof of the medal design!

Saturday normally hosts parkruns and I will get to those shortly. Three Bentley Blues and a green vest took a trip to Victoria Park in London courtesy of Janine’s excellent fundraising efforts with running related raffle prizes! Deborah Cubberley took advantage of her entry to the Greatest Relay Run by inviting along Paul Hollidge, Vicky Presland and Milly Presland. Each team member had to run two 2.5 km laps of the park to give the team 20km in total. Team Great (Bentley) Expectations came 6th out of 21 four person teams in a combined time of 1:25:13. Well done all, a great team effort. 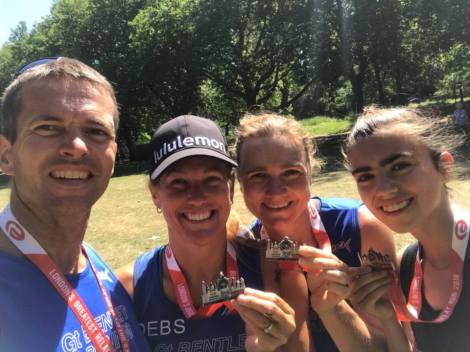 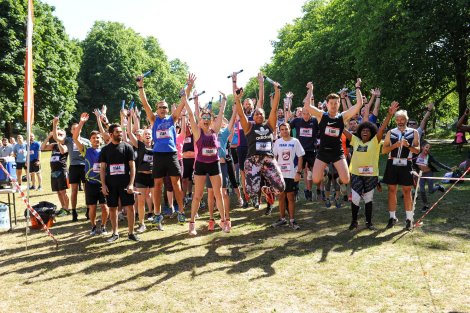 Paul’s excitement to get started is not met by his fellow runner to the left!

In Ipswich Ben and Janice took part in the hilly course in a time of 21:28 whilst over at Mersea Island Andy Stephens ran in 27:42.

The temperatures did not get any cooler on Sunday and whilst lots of us were ‘suffering’ during training runs many of you donned your Bentley Blue vest and headed to various start lines around the south-east of England. Travelling the furthest seeking more training for his Race to the Stones Ultra in a couple of weeks time was Charlie Keitch. After looking at the route for this race and realising it runs past where I used to work I admire Charlie for putting a number of  multi terrain running challenges into his training! It will be a scenic but gruelling challenge, one our male runner of the month will relish, no doubt. This week though he chose to do Bewl 15 in East Sussex, a race he has done before. On a hot and exhausting day he ran it in 1:54:56, slower than usual but Charlie was pleased with the time given the conditions.

Paul Davison ventured to Hatfield Forest to run the Stortford 10, a scenic off-road route around the less woody than hoped for course. Paul ran well despite the heat and bagged a bronze standard in 1:15:17.

Taking part in his first ever 5km run was Jamie Connell. He allowed his dad to run with him as well as his mum and he crossed the finishing line in 34:58. Well done for wearing Bentley Blue with pride and I hope your medal was worn all day! A great achievement. 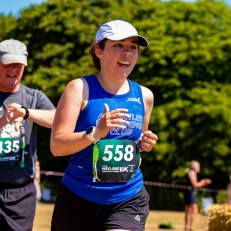 Emma Welham looking strong out on the sunny course. 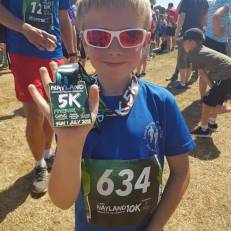 A proud Jamie with his first 5km medal!

Further junior achievements were seen in junior parkrun. At Colchester, Daniel Blacker ran 14:02 and over in Clacton Angel Jasper ran 10:03.

Keep hydrated in the lead up to your races and training runs and lets hope that the sun continues to shine throughout July.