It was a wet Sunday morning at Little Bromley for the 3rd running of the Harwich Runners 10k race.  This is a great race, well organised on a fast flat course, £8 to enter with a mug as a medal afterwards – what’s not to like? Not much it seems as 39 of us turned out in the drizzle to run it, this resulted, at the time of writing, with 2 Essex medals, 7 PB’s, 2 Gold, 1 Silver and 1 Bronze standard as well as a course PB and some great comeback runs!

So here we go……firstly with those Essex medals a Silver being won by Graham Clarke in the M70 category with a brilliant time of 47:54, not far behind was current runner of the month Eric Shaw, also in the M70, who had another great run smashing the 50 minute barrier in 48:10 which won him the second of the 2 medals this time a Bronze!

Our first runner home was Paul Connell in a fabulous time of 38:04 which was also the first of our PB’s and a Gold standard to boot, our second Gold standard was to Neil Robins who also claimed a course PB coming home in 54:43. The silver standard was bagged by Charlie (Patrick Reynolds) Keitch in a “try my injured knee out run” of 40:20.  The bronze standard was secured by Paul Davison who crossed the line in 43:32.  PB’s were run by the “old dog” undertaking new tricks Phil Presland in a great time of 42:57, Anna Mills (44:35) and a massive 4 minute new time was secured by Emma Levett-Welham (1:10:54). Eileen Shadford also recorded a PB in 45:42 she was paced round the course by Tim Ballard who crossed the line with the same finish time.

Our final PB was run by Claire Groves in he first 10k race since giving birth to son Noah who was there at the finish line with dad Luke as Claire broke the tape in a brilliant 48:55. Our other recent mum Natalie Warriner also had a great run finishing in 52:54 – amazing running ladies!

The first race of the day at Bromley though was run by the juniors with great performances from Connor Sharp and Daniel Law who came 1st and 3rd respectively in the under 8’s age group in the 2k race, excellent work boys!

Clocking up the miles once again this week running an incredible 98th marathon in Manchester was Janine Simpson who was satisfied with her time of 4:40 off the back of “hardly any training” in the past month. John Bush also put in some miles running the Austin Powers themed Groovy Baby race held in the Ashlyns school grounds in Berkhampstead.  This was a timed run of 6 hours running as many 3.3 mile laps as you could; JB ran 5 laps totalling 16.5 miles in 3 hours 37.

Sunday also saw the Comic Hero charity run for St Helena hospice which is in Castle Park in Colchester there are 3 distances to suit all 1k, 5k and 10k. Tomasz Komorowski and Mags Komorowska took the 10k option dressed as Batman and Batwoman whilst Wonder Woman Geraldine Springett ran the 1k course with her Ghostbusting boys. 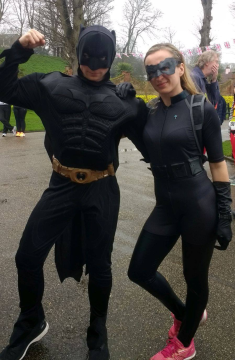 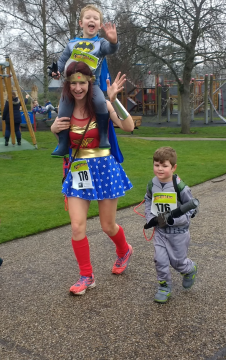 [Batman, Batwoman and Wonder Woman at the Comic Hero Run]

Saturday saw fewer than normal people (unsurprisingly seeing all the races above) taking part in parkruns. Tourism this week saw Sue Thomas take on the 5k course at Dolgellau in Snowdonia this is a two lap out and back course run on a old railway line; Sue decided to have a jog around finishing in 30:17.  Team “Cubberlidge” went to outer Essex this week to get in some hill training at Hadleigh parkrun, there is a small field at this parkrun so is good to record a good finish place if not time. That said 4th placed Paul Hollidge finished in 21:47 and looks well set to crack his sub 20 target for this year with 19th placed Debs Cubberley finishing in 26:14.

What a great weekend well done to everyone!