So this weekend was mainly focused on cross country with another successful year in the A league being secured, more of this elsewhere. The race report this week looks at the 2 ends of the running scale, endurance and 5k so let’s start with endurance and talk about none other than Janine Simpson and Paul Blackwell.
The marathon duo took on the viking 100 challenge down in Kent an endurance race over a choice of 6, 24 and 32 hours. Janine Simpson is now the proud owner of a viking centurion buckle having completed 100 miles! She explains “The course was challenging through fields with the heavy rain and probably a match for xc today!!! My feet are not my own right now but I am the proud owner of a buckle”. Unfortunately 100 miles only counts as 1 marathon in her quest for 100 but that is number 96 complete so she remains well on track. Paul Blackwell joined her as “night time pacer” and he completed 5 laps which was a total of  30 miles adding another marathon to his impressive haul. 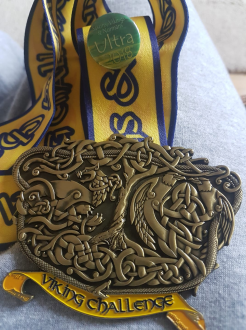 [Mags still had time for the camera – on her way to a 5k PB]
Clacton prom saw Charlie Keitch secure his first bronze club standard at his new 40-45 age group running 20:40 for the seafront 5k, this was secured whilst pushing son Cassius in his buggy.  The consistent Ray Baggs (20:20) was the first blue vest home followed by Brian Telford (24:50) and Sandra James (37:46).
Over at the Harwich prom running a lone furrow was Ben Ficken (19:52) although he was being “pulled” round by faithful companion Janice!
Great running everyone.