This week’s race report starts on Wednesday when three Bentley runners were in Samphire Hoe, near Dover in Kent, to take on The Tolkien Run. The six-hour challenge event involved runners completing as many laps of a 3.75 mile loop as they wished within the time limit, with the option to exit the race and claim a time at any point during the six hours.

Liz Jones set herself the target of running beyond the half marathon distance, and succeeded, clocking up 15 miles in 3:36:07. This was Liz’s longest run since she picked up an injury at the Brighton Marathon back in April. Janine Simpson covered the full marathon distance in 05:23:08. Matt Jones went for distance rather than time, and completed his first ultra-marathon. The race director allowed runners to complete a shorter 1.1 mile loop after eight laps to take them up to 50k, which Matt completed in 4:37:12.

Liz and Matt Jones before (left) and after (right) The Tolkien Run in Kent.

Saturday morning was a typical Saturday morning in that Bentley runners were out in force across the region’s parkruns. Not so typical this week was that there wasn’t a single member of our club undertaking any parkrun tourism! Our furthest afield runner this week was Colin Farmer, who completed Great Cornard parkrun in 21:25. One canine and three human Bentley runners completed Harwich parkrun. Nick Goodman (24:07) and Leoni Harvey (28:28) were among the human competitors. Ben Ficken and Janice achieved a team PB and (just) made it into bronze standard territory when they stopped the clock at 20:00.

At Mersea Island parkrun Luke Groves (26:19) ran with his brother and his pet dog Meatball. The trio gave the 19 minute pacer a run for his money for the first 200m, before settling into a more steady pace that earned Meatball the distinction of being the first canine finisher. Lee Clarkson ran his first parkrun in four months and finished in 23:15. Also returning after a parkrun Absence was Chusa Bautista Fructuoso. Having not run a parkrun for two months, she aimed to stay with the 25 minute pacer, and exceeded her goal, crossing the line in 24:37.

Clacton Seafront was once again the most popular parkrun among Bentley runners. Charlie Keitch recorded a new buggy PB (running while pushing his son in a buggy), managing to break 20 minutes for the first time, finishing in 19:57. Impressively this time was only 21 seconds slower than his fastest solo time on the course. Scott Young clocked 23:39 and remarked ‘good weather for it really, finished before it started to rain’. Kieron Hayes (32:11) recorded his first parkrun since 2014, and his Clacton Seafront debut.

Sunday was a very busy day for the club, with runners toeing the line at a range of marathons and half marathons. Sunday morning saw a Bentley runner competing at one of the big ones – a World Marathon Major – the Berlin Marathon. Now in its 44th year, the race is famed for being a fast one, with the last six men’s marathon world records having been set there.

Men’s captain Chris Warren was among the nearly 44,000 runners who completed the 26.2 mile route around Germany’s capital. Chris crossed the famous finish line near the Brandenburg Gate in 2:57:31. This was Chris’s 9th marathon and 5th sub-3:00 finish. The time also earned him a gold standard and a place in the club champs.

Meanwhile, back in the UK Janine Simpson was running another marathon. Janine ran the Hull Marathon in 4:38:25, earning herself a bronze standard. She described the event as a ‘surprisingly well organised race with a bit of everything on the course and twice over the Humber Bridge’. This was Janine’s 78th marathon.

Also running a marathon on Sunday was Meera Rajoo-Oakley. Meera headed north of the border to compete in the Loch Ness Marathon. Targeting a gold standard time of 3:30:00 or under, Meera was optimistic. But on the day the course profile made pacing very difficult. Meera described the course as ‘a nice course with trees on your right, water on your left, but impossible to pace as is downhill with a few hard kicks upwards for the first 10 miles then flattish, then kicks up at mile 18… …then undulates through Inverness.’

Once it became apparent that the gold standard was unlikely, Meera changed focus and set out for a new PB. Aiming to beat her time of 3:36:54 at the London Marathon in April, Meera crossed the line tantalisingly close in 3:37:01.

It was a weekend of mixed emotions for Charlie Keitch. After the elation of his buggy 5k PB at Clacton Seafront parkrun on Saturday, it must have been with high hopes that he crossed the start line of the King’s Forest Marathon on Sunday. Charlie had planned for the event to be his final long run before the Stort 30 next month. But things didn’t go to plan, and as he approached the 18 mile marker Charlie had a difficult decision to make. Having started to experience pain in his ankle, he felt he should drop out, but he was currently in third place. In the end he opted for caution and exited the field. He was pleased that he did, as he found himself struggling to walk by the time he reached the previous aid station about a mile back. But I’m pleased to report that Charlie said his ankle was feeling a lot better after he iced it, and he is now resting and reviewing his training schedule.

Running at the other end of the distance spectrum on Sunday morning was Angel Jasper, who ran Colchester junior parkrun. Angel completed the 2k course in 9:43 and finished in 10th position out of a field of 115. The time was a new 2k PB for Angel, and the finishing position was her highest ever at the event. This also marked the third consecutive run at Colchester junior parkrun where Angel has achieved both time and finishing position PB’s, following on from last week’s 9:49 in 13th position and her 9:53 in 16th position when she last ran two weeks before that.

Sunday also saw the inaugural running of the Simply Health Great East Run. Part of the Great Run series, the half marathon route around Ipswich allowed runners to take in all of the sights of the town, including the Orwell Bridge, Holywells Park, the waterfront and the Willis building, before finishing in the Portman Road football stadium. Initial advertisements also advertised a flat and fast PB-friendly route. However, a few of our runners reported that Freston hill wasn’t flat, but some solid times were attained none the less. 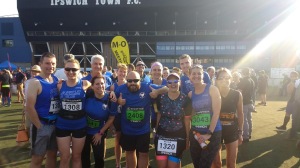 Vicky Presland took a club champs spot when she clocked a 1:35:22 finish. Anthea Colsell earned a bronze standard, finishing in 2:07:07, with Darren Willey finishing a second behind her. Kathy Bishop ran 1:51:07, which was a gold standard time and also earned a place in the club champs. Emma Wakeling earned a bronze standard when she recorded a 1:54:36 finish. Tim Ballard ran a three-minute PB when he finished in 1:27:55. Tim enjoyed the event and gave the following glowing review: ‘Loved the support around the course today. Tempted to run again next year.’ Also clocking a speedy time was Jake Darkins, who clocked a 1:31:11.

David Wright is accustomed to being at the front of the field and running at break-neck speeds. But at the Great East Run he opted to run with his wife, and finished in 2:08:31. David said ‘I really enjoyed being able to soak up the atmosphere round the course, rather than flogging myself!’ Jennifer Aylen had the misfortune of running on a sore ankle, but still finished in 1:49:57 and said that she ‘would definitely do it again’. James McCullagh clocked a sub-2:00, recording a chip time of 1:58:31. Having not trained as much as he would have liked in recent weeks, Mark Crittenden was hoping to break 2:30 at the Great East Run. However, a hip injury sustained around mile nine meant that he was forced to walk the final four miles. Mark said that all things considered he wasn’t too unhappy with his 2:39:37.

Sarah Flectcher continued her strong recovery from her recent stress fracture, completing the Great East Run in 1:50:56.  Deborah Cubberley and Paul Hollidge ran the Great East Run together, both finishing in 2:01:17. Debs reported that it was a ‘well supported and organised race’, and said that she loved the route. By all accounts Magdalena Komorowska was happy with her bronze standard finishing time of 1:53:51. Tomasz Komorowski ran 2:03:59 and Neil Robbins completed the 13.1 mile route in 2:23:58.

Also competing in half marathons on Sunday were Rachel Giles, Sue Wright and Marion and Nina Simmons. Rachel completed the Pleshey Half Marathon in 1:53:46, saying ‘a lovely pretty course with lots of marshals and water stops!’ Sue sadly reported that she had the worst run of her life, finishing in 3:16:00 she reported ‘Had to walk/jog from 3 miles to the end. Absolutely no energy – going to blame The Three Yorkshire Peaks last Sunday’. Nina Simmons completed her first ever half marathon when she crossed the finish line with Marion Simmons at the Disneyland Paris Half Marathon in 2:19:12.

Runners of the Month for October