This weeks race report starts unusually on a very busy Wednesday night for Great Bentley Running Club at the first of our Mickey Edwards 5k Handicap Series. I think now is a good time to point you all in the right direction to find out about the history behind this series, which Russ also shared on the club Facebook page this week.

Saturday saw further 5k’s with the standard parkrun. John Bush checked in at Ipswich with a time of 30:19, whilst James McCullagh achieved 21:28 at Maldon. Ray Baggs was the second finisher at Clacton Seafront parkrun with 20:05, with Richard Moor fourth finisher in a time of 21:14. Kevin James 24:09, Claire Reynolds 36:01 and Sandra James 37:06 also completed the coastal course. Tonie Wilson and Sue Wright competed at Harwich parkrun with times of 24:50 and 30:47 respectively. Six legs but only one recorded time of 20:29 for Ben Ficken and Janice at Mersea Island parkrun.

Colchester Castle parkrun saw a few blue vests with Craig Warriner finishing in third place in 18:07. Malcolm Jarvis is not usually seen at Colchester but finished in a very respectable 21:20. Lee Clarkson and Chusa finished in 23:09 and 24:38 respectively and finishing the Bentley line up was Claudia Keitch 28:37 and Scott Young 28:38 running together.

The final parkrun of the line up is a mere 3500 miles from Colchester (according to Apple maps) and sees two blue vests at Roosevelt Island DC parkrun in Washington DC. Paul Hollidge was third male in 21:27 (only 31s from being first!) and Debs Cubberley was second female in 26:36. 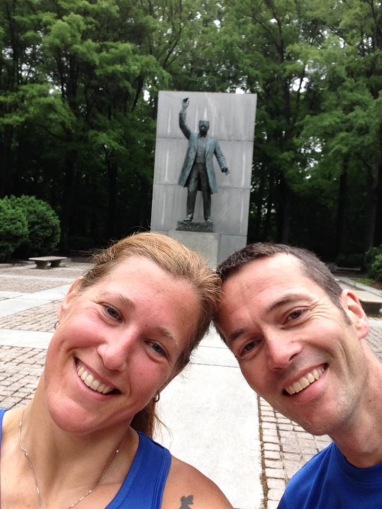 (Cubberley and Hollidge in Washington DC)

Sunday was luckily a lot cooler than this weekend the year before which saw top performances from the club. Tim Ballard and Lorna Sharp were cheered on by Rachel Giles at Alton Water 10k. Ballard finished his first 10km race in 40:55 and achieved a bronze standard, meanwhile Sharp finished in 52:13 and got her a spot on the club champs list. 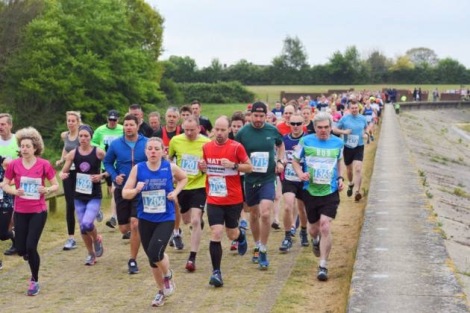 There was also the return of the Frinton and Walton half marathon which sadly was not quite a half marathon with everyone recording the distance at 12.8 miles. Nevertheless it was enjoyable with Charlie Keitch finishing in 01:29:11 and Jennifer Aylen 01:44:11. 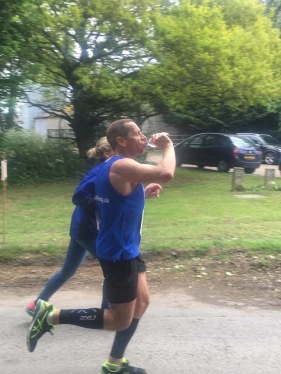 (Davison making use of the GBRC water station)

Our final race and the biggy is Halstead & Essex Marathon hosted by Halstead Road Runners in beautiful, but notoriously hilly countryside. This is the 23rd year of the event and GBRC take control of what has been described by many as the best water station on the course.  Paul Davison was the first blue vest to cross the finish line. This was his second marathon following his debut at New Year whereby he got lost and ended up accidentally running 27.5 miles! This did not deter him and he came back with a vengeance, knocking plenty of time off his 03:30 target, crossing the line at 03:21:34 achieving a bronze standard. Second in 03:37:17 was a pair of Minion shorts being worn by Ben Ficken competing his 10th race at marathon distance or above. Andy Stephens put in a strong performance with 04:14:50. 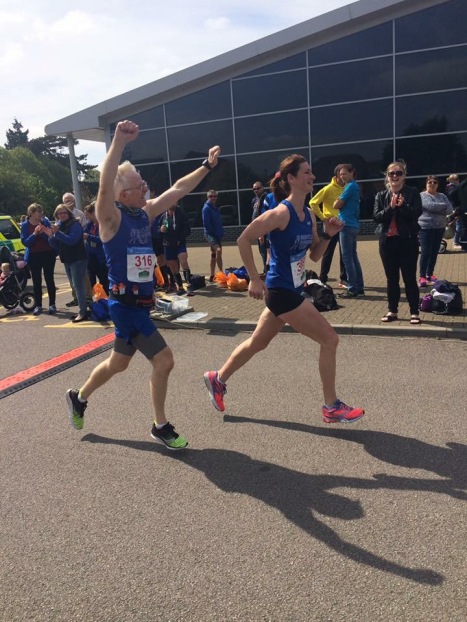 The final two blue vests came across the finish line whooping and waving together and were the cheeriest faces all day. Paul Carlisle ran the whole 26.2 miles with marathon first timer Geraldine Springett but let her have a 2 second gain at the finish with a time of 04:28:54 and finishing in 04:28:56 himself. Excellent sportsmanship and club spirit Paul, Geraldine’s gratitude was clear both at the finish line and in messages afterwards. However Halstead clearly was not enough for Carlisle to get his hills fix as he was seen tearing up and down at hill training the very next night… 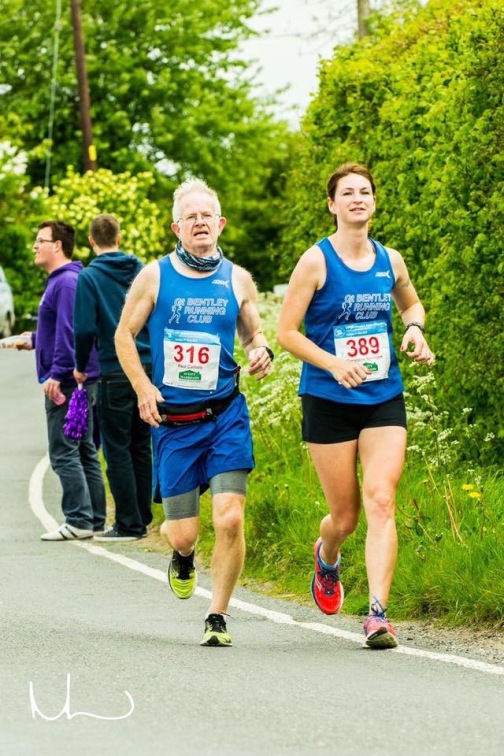