This week’s race report starts on Saturday, which is of course parkrun day. The most popular parkrun venue this week for Bentley runners was Colchester Castle, which was celebrating its fourth birthday. Nine GBRC members took part in the 5k run around Castle Park.

Lee Clarkson (25:02) and Chusa Batis (26:54) ran for the first time since returning from their holidays. Chusa reflected “First parkrun after holidays is never easy but I managed it in 26:54 sandwiched between two training runs.” Claudia Keitch and Scott Young ran together and completed the 5k course in 28:52 and 28:53 respectively.

Rich Moor was the first Bentley runner across the finish line in 20:29. Louise Upston ran a course PB by over a minute, finishing in 28:15. James McCullagh finished just two seconds behind Chusa in 26:56. Meera Rajoo-Oakley and Anna Mills finished in 23:22 and 23:10 respectively.

Tom Fowler made his second appearance at the course. His time of 20:08 was within four seconds of his previous performance, and earned him fourth position, exactly the same as last time. Robert Thorpe (24:07), Alison Clarke (29:35), Sandra James (35:02), Kevin James (24:01) and Patrick Reynolds (22:31) completed the Bentley representation.

Bentley on tour – the club’s representation at Media (IOW) parkrun this week.

On to this weekend’s parkrun tourism and it was Medina (Isle of Wight) parkrun’s 300th event. Participating in the milestone run in the park were Linzi Iddon (41:59), David Iddon (31:23), Megan Hughes (31:22, second in her age category) and Caitlyn Hughes (38:07). Linzi said “Very nice course round a field up a path next to river, back down path and back round the field. Fairly flat. 335 runners , would recommend”.

Sunday saw the second annual running of the Little Bromley 10k. The event website states that the ‘course should prove good for PB’s with very little (43 metres) ascent.’ Bentley runners certainly took advantage of this with many PBs, standards and club champs positions secured.

Despite a big difference between his official time and his watch time, Luke Groves ran a 10k PB by over a minute when he crossed the line in an official time of 51:57 (compared to a watch time of 51:26). Also recording a PB and a significant watch and chip time difference was Paul Davidson. Paul thought he had achieved a silver standard with seven seconds to spare when he stopped his watch at 40:53. But the official results listed his time as 41:02 – two seconds outside of the silver standard time.

Father and daughter duo Eric Shaw (53:48) and Karen Skene (52:14) both earned places in the club champs. Also earning a place in the club champs – and not far outside the club’s all-time top ten performances list – was Ryan Day with a speedy 36:42. Neil Robbins completed his first ever 10k and was pleased to finish in under 60 minutes with his time of 57:10. Close behind was Rebecca Conran (57:50), who commented “too hot for me!”

Louise Upston, running the day after her Colchester Castle parkrun course PB, ran within 30 seconds of her 10k PB, clocking a 58:26 finish. Jack Wicks ran 55:22. John Bush finished in 1:01:10, nearly three minutes faster than last year and his fastest 10k for over a year. Vicky Law earned a bronze standard, crossing the line in 57:58. Geraldine Springett earned her first silver standard with her new 10k PB of 49:27.
Scott Young surprised himself when he ran within 5 seconds of his PB, finishing in 46:53. Jennifer Aylen’s time of 48:56 earned her a place in the club champs.

This weekend was the Brighton Marathon weekend, and as has been the case every year since the inaugural event eight years ago, it was an unseasonably dry and sunny day. This made for perfect spectating weather, but the conditions were a little warmer than ideal for marathon running.

On Saturday morning Isabella Jones took part in one of the ‘Mini-Mile’ races. A series of children’s one mile races that were held throughout the day in Preston Park, Brighton as part of the marathon weekend. Isabella completed the mile in 12:18 and happily collected her medal and t-shirt.

On Sunday morning was the Brighton Marathon 10k, a flat and fast route starting in Preston Park and finishing on the seafront at the marathon finishing line. Charlie Keitch and Matt Jones were surprised to see each other early on in the race and Charlie offered to pace Matt to a new PB and hopefully a sub-43 minute 10k. Charlie paced excellently, finishing in 42:33 but Matt couldn’t keep up. He crossed the line in 43:04, a new 10k PB by 42 seconds. Matt was very happy with a PB, especially considering he very nearly didn’t run at all due to an injury.

Within a couple of minutes of our Bentley blues crossing the finish line of the 10k race, back in Preston Park the first wave of runners crossed the start line of the Brighton Marathon. Gary Parker completed the 26.2 mile race in a new PB time of 3:49:05. Liz Jones ran within two minutes of her marathon PB, achieved just six weeks before, when she crossed the line in 5:34:44. Upon finishing the marathon, Liz collected her medal, making this the second consecutive year of the Jones family collecting all three available medals from the weekend (Mini-Mile, 10k and marathon). 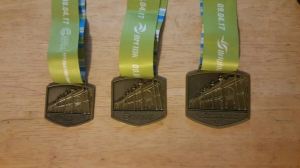 The Jones family hoard from the Brighton Marathon Weekend 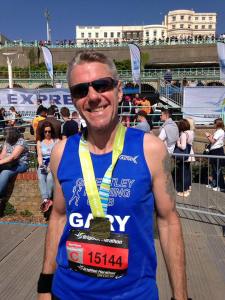 Also running a marathon this weekend was Hélène Tyler. She ran the Rotterdam Marathon in very hot conditions and finished in 5:58, despite sunburn and heatstroke. Closer to home Tim Ballard ran the City of Norwich Half Marathon in a new PB of 1:30:46. This time earned Tim a bronze standard and 59th position out of a field of over 2000 runners.

Runners of the Month for February

Ladies – Every lady in the club!