Twenty-nine blue vests were out on display at parkrun on Saturday morning. Impressive considering the snowy conditions! Even more impressive are the eight top 10 finishes over five courses and three personal bests achieved that morning.

As the flakes began to swirl, Benjamin Ficken finished in second position at Mersea Island parkrun with a personal best time for the course of 20:14. He was accompanied by Janice the pugalier who also achieved a pooch best for her efforts. 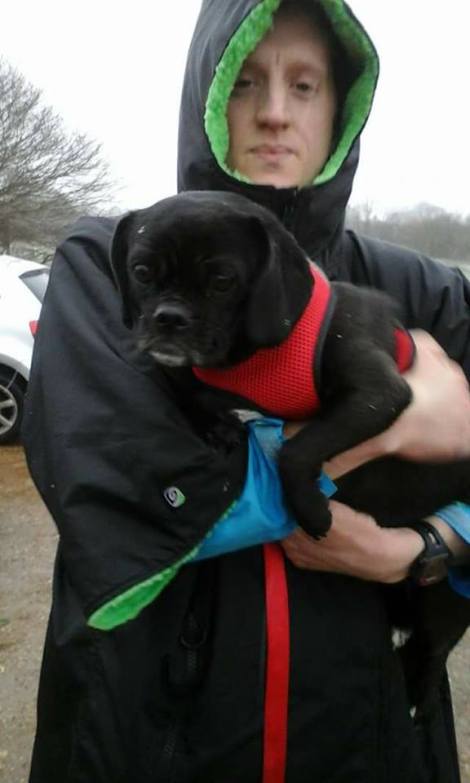 Also enjoying the canine friendly course at Mersea were Luke and Claire Groves who ran with Meatball and both finished in a time of 29:54. This was Claire’s first attempt at the Mersea course.
Another couple enjoying their first time at Mersea were Paul Hollidge and Deborah Cubberley who finished in 26:05. This may have been their first time at Mersea however it was Cubberley’s 50th parkrun and she celebrated with a second place finish amongst the ladies.
John Bush made up the representation at Mersea Island, completing his run in 33:12.

A personal best at Harwich came for Tim Ballard. With a time of 19:56 Ballard arrived at the finish line in 6th position. Taking on the Harwich course for the first time was Natalie Warriner who stopped the clock in 28:48.

A personal best came for Louise Upston at Clacton Seafront who finished in a time of 27:51. Upston had ran with and was followed home by Jack Wicks in 27:52. Just one second away from a personal best for the course was Matt Jones with a time of 21:42.
Representing GBRC at the front of the field were Dave Goldsmith, Tom Fowler and Robert Thorpe. Finishing in 3rd position, 4th positon and 9th position respectively, their times of 19:39, 20:04 and 20:52 give no hint of the snowy conditions in which they were ran.
Patrick Reynolds was also out at Clacton with a time of 22:12; he was followed by Scott young in 23:12 and Kevin James in 23:14. Regular at this course Brian Telford finished in 24:29 and completed the line up for the GBRC men at Clacton. For the ladies, alongside Upston, the contingent was made up of Alison Clarke, Davina Swindell and Sandra James, who finished in 29:21, 31:21 and 35:48 respectively.

At Colchester Castle a lone female GBRC member braved the snow to test her recovering calf on the castle park hill: Chusa Bautista Fructuoso finished in 30:05.
For the gents David Wright led the blue vests with a 3rd place finish in 18:37. Wright was followed home by Richard Moor in 19:58 (10th finisher); Lee Clarkson in 21:35; Phil Presland in 22:28 – his best time since July 2015; Andy Stephens in 23:41; and James McCullagh who completed his 5000m in 27:59.

Finishing the parkrun representation was Charlie Keitch, who took on the Tilgate course for the first time and completed the course in 21:00.

There was a bitter chill in the air on Sunday. Braving the cold at junior parkrun were Angel Jasper and Yasmin Leek. Both completed the course at the Colchester recreation ground in 12:28 and 18:44 respectively.

After two weeks of rest Paul Blackwell was back with a vengeance this weekend completing marathons #117 and #118. The Unusual Suspects challenge at the Gravesend Cyclopark comprised 7 laps in the snow. On the Sunday Blackwell completed the David Bowie Music Legends Challenge the second event of four at the Cyclopark – we will await next week’s report to see if he completes the series!

Another GBRC member who just can’t rest is John Bush. At the Olympic Park 10k Bush completed his run in 1:03:30 – 90 seconds faster than the 10k he’d completed the week previous. Bush’s run also boasted an impressive negative split: 34:31 vs a second half in 30:59.