The theme of Saturday’s Park run antics this week proved that Christmas parties and running 5k are possibly not the best mix. In amongst the few sore heads and hangovers were some excellent runs none more do than on the strange route at Colchester Castle Park (yes it is handy listening to the briefings they do tell you the route!) Where both Luke Groves (25:07) and Louise Upston (29:21) recorded course personal bests. The first blue over the line was Paul Connell (21:03) followed by Meera Rajoo-Oakley (22:42) running of the excesses of the previous evening. Claire Groves (23:49), Jack Wicks (29:22) and Sue Sorrell (29:56) completed the representation.

Over at Mersea was their inaugural Parkrun, following last week’s successful test a host of blue vest were out. The course is fairly flat and mainly on grass but this week the runners had fog, cold and damp to contend with too. Our six runners were Vicky Presland (21:15), Phil Presland (22:29), John Booty (22:43), Belinda Palmer Barnes (28:50), John Bush (31:49) and Martin Owen (34:01). The flat course at Clacton is proving to be a club favourite where more hangovers were being sweated out. Paul Davison recorded a swift 19:48 but felt distinctly unwell at the end whilst recording a third place finish, fairing a little better on the kill or cure was Sarah Fletcher (23:21). The blue vests were well represented in the top ten with David Goldsmith (19:30), Charlie Keitch (20:14 – trying out his dodgy knee!), Rich Moor (20:15) and Patrick Reynolds (21:23) all in the top ten. Scott Young posted his quickest time this year and a course PB in 22:48 and was followed home by Kevin James (23:28) and Sandra James (36:36). 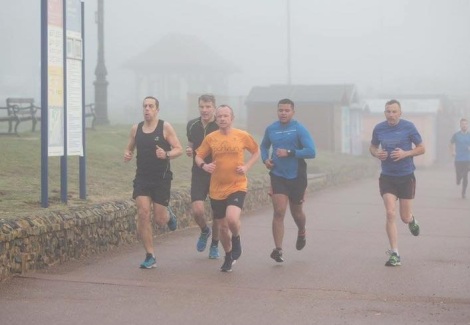 [From the left Paul Davison, Rich Moor, Charlie Keitch and on the right Dave Goldsmith at Clacton Seafront Parkrun]

Toni Wilson was our sole representative on the Harwich Parkrun course this week finishing in 23:59.  Our tourism this week was supplied by Andy Stephens who warmed up with a 2 hour run to the start line at Coventry Parkrun when he then completed the 5k in 25:11.

Finally, we had some intrepid marathon runners this week who took on the 26.2 miles at the Usual Suspects marathon in Dover.  Our own Usual Suspect Paul Blackwell was joined this week by Janine Simpson, Alison Day and Jamie Neill.  They were rewarded for their hard work with a massive medal…… 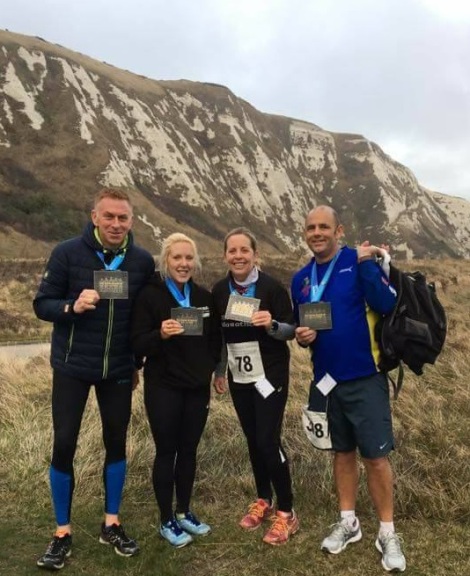 [Usual Suspects and their massive medals…..]