Who is she you ask? And which mountain? Well we had four, yes count them, four GBRC ladies running over the mountains in the Snowdonia marathon this weekend.
Barbara Law and Lindsey Horton ran the 26.2 miles together finishing in 5:26:29 and 5:26:28 respectively. Law’s time was fast enough for her to win the F70 category and Horton credited Law’s spirit for getting them both round the course.
Helene Tyler also completed the challenging course, known as one of the best in the UK, that circles Mount Snowdon, Wales and England’s highest peak. Tyler finished in 6:20:18, and showing steady progress as she trains for the Marathon de Sables.
Caroline Searle was out on the mountain running to raise funds for Colchester Hospitals Charity and dedicating her race to mum Pamela who passed away earlier this year. Searle finished in a personal best time of 5:01:08, knocking 15 minutes off of her previous marathon record. 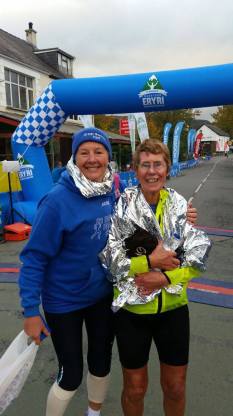 [Left: Caroline with her medal after a personal best run; Right: Lindsey and Barbara after their run]

Elsewhere in the country there were more miles and more hills for John Booty, who completed the Beachy Head marathon in 4:49:51. Previously known as the Seven Sisters marathon, the race travels over the South Downs National Park in Eastbourne. Booty placed 533rd out of 1711 racers.

Opting for 26.2 miles on road was Rebecca Conran. For her debut over this distance, Conran ran the entire way, picking herself up from a dnf the week before and completing the race in an impressive 4:29:00.

[Rebecca after completing the Dublin Marathon – her first attempt at 26.2 miles]

Much less common than 26.2 is 15. There are very few 15 mile races in the England race calendar and even fewer that are entirely on road. The Holmfirth 15 up in Yorkshire is becoming a GBRC favourite and this year’s blue vest at the race was Jamie Neill. Completing the 15 hilly miles in 1:56:26, Neill declared the race horrendous. Whether he goes back for a second attempt at it remains to be seen.

Moving down through the distances we turn to the Wimbledon half marathon. Katy Calver completed the race over the common in 1:56:31. The race is held four times a year so gives runners an opportunity to challenge themselves over the same course more regularly.

Shorter still is the 10 kilometre race. Two races saw GBRC members amongst their line-up this weekend. At the Clock Change Challenge Matthew Jones ran a personal best time of 43:46 to finish in 61st position of a field of 300.

At Thurrock 10k Lee Clarkson, Samantha Godden, and Jack Wicks were representing the club.  Clarkson ran a personal best of 42:49 and took home the trophy for third place; Godden also bagged a third place trophy in the ladies competition with a time of 45:02; and Jack Wicks completed the course in a strong time of 54:09. 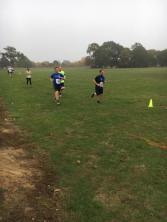 [Left: Matthew heading towards a sub 44 10k; Centre: Lee and Sam with their third place trophies; Right: Jack looking determined as he completes his race]

Earlier in the week 5.85 miles was the name of the game in the fifth and last of the GBRC trail run championship. Charlie Keitch had already won the men’s competition having taken maximum points from the four previous races but was looking to complete his set of first place finishes with this the final race. The ladies competition was tied at the top between 2015’s champion Tonie Wilson and Meera Rajoo-Oakley. Competitors were invited to start running from 6:30 and almost all were out of the hall by the time Rajoo-Oakley managed to park her car and join an impatient Paul Carlisle to start their race. With the Championship on the line, Carlisle and Rajoo-Oakley set off at blistering pace, and were soon passing Wilson and her partner Trish Stacey as they searched for a telegraph pole and finger post sign in the dark. Rajoo-Oakley and Carlisle arrived back at the village hall in 53:00; a time that secured the ladies title for Rajoo-Oakley as well as giving Carlisle his first win of the series and denying Keitch that clean sweep of victories this year.
In total 20 GBRC men and 15 GBRC ladies were out exploring Kirby Cross that evening. Following the Rajoo-Oakley/Carlisle pair was solo-runner Keitch (53:45); Patrick Reynolds and Kevin James ran as a pair finishing in 54:24; new-comers to the competition James McCullagh and Lee Clarkson, who was fresh from a marathon PB also broke the hour in 57:48; Michael Warren, also new to the competition, was accompanied by Chris Warren (1:02:58); Paul Davison and Sarah Fletcher finished in 1:04:54, their first attempt at trail running; Rob Thorpe was partnered by Andy Fuller (1:07:44); Michael Simmons took 12th in the men’s competition with 1:10:50, he ran with Marion Simmons, Nina Simmons and Alison Clarke who took joint third in the ladies competition; close behind was the team of Steve Black and Jamie Neill in 1:14:03; another team trying the GBRC trail runs for the first time were John Ferdinand, Claire Groves and Luke Groves (1:16:47); Derek Greenham took 17th in 1:18:45, he was accompanied by Sarah Greenham; John Bush made his return after undergoing surgery on his leg the previous month, running the course with Gemma Colling, Janine Simpson and Karen Skene in 1:30:10; and the team of Mark Crittenden, Linzi Iddon and David Iddon made it back to the hall 1:36:55.

Now we get to the sharp end, the ‘short’ distance of 5000m. At parkruns this week we had 20 blue vests out across the country. Norwich parkrun welcomed Andy Stephens for the first time (24:37) as well as Adam Smith who finished in 2nd position with a time of 17:45 (his personal best for the course being 17:00).

Clacton Seafront parkrun is fast becoming GBRC’s favourite local parkrun and this week nine members were out on the course. Six members achieved course personal bests: Sandra James in 33:52; Deborah Cubberley in 26:46; Frank Gardiner (23:41); Brian Telford (23:20); Kevin James in 23:09; and Patrick Reynolds, who in a time of 21:42 was the 6th finisher at the run. Mark Crittenden made his first attempt at the three laps finishing in 31:59 whilst Jack Wicks was resting his legs before his 10k the following day, he finished in 27:53. Paul Hollidge had ran with Deborah Cubberley, also stopping the clock on 26:46 and achieving his 100 run milestone.

Further afield was Liz Jones who took on Pomphey Hill parkrun and finished in 29:41.

And even further away was Rebecca Conran, who took advantage of being in Ireland for the Dublin Marathon and ran Navan parkrun in 25:25.

Following in his father’s footsteps was Rufus Keitch. Completing Junior parkun (2000m) in 13:51 (a personal best) Rufus achieved his half-marathon milestone and collected his wrist band to prove it. Angel Jasper was also out at Colchester Junior parkrun, completing her 2k in a personal best time of 12:05.