Well November was quiet on the racing front but December got even quieter – usually 2 XCs in December.  However, I personally got out on some long runs which somehow led me to sign up to the Benfleet 15 and after our success in the Essex Champs, I somehow got persuaded (more like given the guilt trip) by the men to do the Essex 20.  So the New Year won’t be quiet.

The results of the Essex Champs finally came out earlier in the week and Bentley ladies took Silver in the team event for the series.  Something we have never done before so well done to all those who helped us along the way.  We have to have 4 ladies in each race to count and 3 ladies score so all the following Bentley babes played their part – Anna L, Anna M, Barbara, Eileen, Janine, Lara, me, Natalie, Rachel G, Sam, Steph, Sue S, Tonie.  Well and truly a team effort.

Barbara took the gold medal again in her age group – a remarkable achievement especially given the year she has had.  I took the Silver Medal overall and gold in my age group – very proud of this.  Eileen got bronze in her age group and would have been higher if she had not been injured at the end of the season when she was flying at the beginning of the year.  I am going to give the races a big push again next year mainly as the races selected are lovely with the 5 mile being Wix.  The others are Essex 20, Halstead Marathon (which I am NOT planning to do again), Pleshey half, Stebbing 10 mile, Brentwood 10k.  Would be lovely to see us competing in some of the other age categories.

Anyway back to business, we had XC at the beginning of the month at Harwich.  God what a tough course that was.  We were light on numbers causing a slight panic on my part at the start and the look on the Sue’s faces and Marion when I told them they could be scoring was a classic.  Anna M breezed in just in the nick of time and only Tricia remained with the look of horror on her face when she knew she was a scorer.  Sophie, Anna, Tricia and I scored and we lifted ourselves from the bottom of the table so well done all.  Big thanks to Tricia who dealt with the pressure I piled on her and put 110% in to get round that course for us all.  A big well done to Rachel who attempted this as her first XC and survived.  Three days later, she announced to me after we did 7 miles on a Wednesday that it was the furthest she had run so she had quite a week.  Ipswich is next and is far easier…..

Must mention our Junior Team where the boys were all poorly and the girls were out in force – Katie, Milly, Emily, Eve, Hallie and Amie.  All did great and improving all the time as their course was as bad as our one.  Milly had a great run being the first under 11 home after a few weeks not running and Katie was 3rd girl home.  What I love is they keep going and we can get a smile out of them at the end.

Parkrun PBs continue with Claudia getting 2 in December and Pauline, Lynsey and Sinead also joining her with a PB at 5k.

There have been other events which have been well supported – Roger’s Trail Run got some of you muddy but you all seem to have a good time. Claire Groves got a new 5 mile PB at Witham. The Boxing Day Runners vs Riders saw a large number of blue vests. It was even muddier than Harwich but hey ho it was Boxing Day and just seemed more fun!!  The Festive season was finished off by the Apple Jack Trail where according to my husband, scenery and route great, running hard but best bit was the crumble which will make him back to do it again.  Linzi and Helene did their bit by taking part in Santa runs – the medals were definitely full of Xmas bling.

Some of the hardcore ladies took on the Flitch Way Marathon on New Years Eve.  If some of you think a road marathon is your ultimate challenge then an off road one takes it up a notch.  They all did it, looked like they enjoyed it (probably once they had finished).  Well done Sam, Janine and Helene.

Before I move onto the Runner of the Month, you may have heard that Clive is standing down as Men’s Captain.  On behalf of the ladies, I just wanted to thank him for all his advice.  He has helped many of us including me on my technique, pacing a number of the women to impressive PBs or pushing them harder in training.  I am hoping he will still be around for us to learn from but I wanted to take the opportunity to say THANK YOU.

So now for the main event, my Runner of the Month this month is for a person who supports our ladies team in XC even though she doesn’t live close and had a stonking run at Harwich in tough conditions.  She was a strong contender in the summer for her Ironman achievement but I didn’t award it to her as she was representing her Tri-club at the time.  Therefore it seems right and apt to award it to her this month but recognising her again for what she did in the summer.  I think I was even more impressed that she did XC with a clear head this time!! Anyway thank you SOPHIE APPS for your commitment and effort. 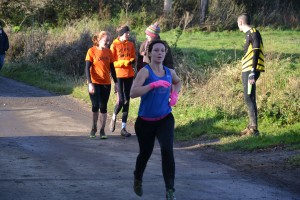