Welcome to Autumn, although at the moment the weather is better than July, so welcome to Summer 2014 part 2. Confused? Then welcome (no. 3) to my head and world.

As is tradition, the road racing season truly got into its stride in September with races coming thick and fast. The first being Langham where GBRC flashmobbed the event. It was great to see Russ back on the road and smiling his way to a fabulous 37:31. I’ll leave you to work out which part of that sentence isn’t factually accurate. Martin Mr June Owens picked up another pb (bored with him now) and it was really nice to see our World Champion performer, Michael Sommerlad out running putting in a time 4 minutes faster than he did in 2013. There were a number of other great performances and some, by their own admission, not so great. The stand out one for me though was Graham Clarke’s run. Graham achieved a very rare and very beautiful thing at Langham with his Diamond standard performance. I’ve been at the club nearly 8 years and I can only think of 1 or maybe 2 men who have done that in that time. It is truly outstanding, well done Graham.

Chris ran another super-consistent race at the Great North Half Marathon, nearly missing the start and missing the Red Arrows. Hands up, it was part of my clever ploy to slow him down as little else seems to work. Fantastic.

The circus then moved to Dedham for the fun and joy (it really isn’t BTW) of the hills out and up from the village centre. This month’s rant is the extortionate cost of that race. It’s for a charitable cause and all that but it’s priced me out of ever doing it again. Moving on…..

Chris’s little feet again went like the clappers to easily get within the top 10. GBRC men have done that I think consistently in the last 7 years. There were great pbs for Patrick Reynolds and young (ahem!) Malcolm Jarvis. Great achievement on a course I can only describe as plain nasty. Oh, and Martin Own didn’t get a pb for a change (yay).

The same weekend, because Dedham was too tame, Paul Carlisle and Rodger Alexander went for a jog around the Brecon Beacons. I hear they had to share Joe’s Endure 24 tent and as a result are getting married very soon. The round took them just under seven hours, mainly because of the huge quantities of cake they had to carry. Very sloppy boys.

On to Pleshey and Ipswich half marathons. Well done race planners for putting these on the same day – Duh! Nonetheless, GBRC runners turned out in numbers at both events, the former being both the Essex and GBRC Club Championship events. Our club champions from the event are:

Oh, and it really pains me to put this….

Well done to all of you, just make sure you get to the Club awards night in December to pick up the rewards for your efforts. Next stop for Club and Essex Championships is the Tiptree 10 mile on 12th October. It’s up to you to make it competitive and not just a turning up prize! John (I never get a mention) MacKay said the other day there was no one in his age group. I don’t think that’s true, so I make a special plea to the O65 men out there to get to Tiptree. I’m not sure if John is on another holiday when the race takes place but I’m sure he’d like the company and have to work for any championship prize.

There were some great runs at Ipswich too. Craig Warriner ran a fabulous 1:21 on a tough course to prove he’s not just a blur in training (although his is that too). Patrick Reynolds grabbed another great pb too. Martin Owen didn’t.

I couldn’t let September go without giving my very best wishes to Joe Alexander who moved out of his Dad’s truck to properly roofed accommodation in Loughborough. I am sure you will all join me in wishing him the best in his time at university. Loughborough has great athletics facilities so I look forward to watching Joe’s progress over the coming months and years.

Now to the Runner of the Month for September. He’s bendy, he’s tall, he trains hard, he dusts himself off when it doesn’t quite go to plan and is then more determined to do better or achieve his goals and stays positive.  This was really in evidence when initially thinking he’d missed his first standard by a measly 7 seconds, which over a half marathon is undiscernible. He was still very happy and positive at the time just with a pb. So, for actually achieving his first standard through sheer hard work and positivity, my choice this month is Darren Horner. 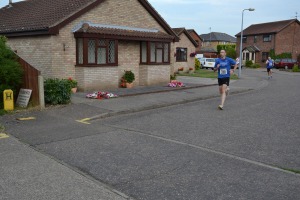 Something, one of many things, that I bang on about is staying relaxed when you run. What really brought it home was my son’s primary school sports days a few years ago. I think that’s because children show you the extremes. In the sprint race, those who pushed as hard as they could, arms flaying, legs pumping and generally windmilling themselves to the line were easily beaten by those who maintained form, stayed upright and ran through their hips, just using their arms for balance. You don’t run from your arms so don’t use them to pull you along.

With endurance running, it’s hard to remain relaxed when you are tired but it is important so to do if you are not to waste energy. I’ve mentioned posture, pulling yourself up to run tall and driving from the hips before and these are all part of it. I am sure many of you have techniques to help you relax as you run but here are a couple of things I try, which may work for you. Firstly, keep your shoulder slightly dropped as you run, occasionally drop both arms down to your sides and just shake out your fingers to relieve tension, don’t let your head sink into your neck like a tortoise! Secondly, relax your hands. Imagine you have a tennis ball in each hand and have you hand cupped around it, fingers closed together, gap between fingers and thumb though. This may sound strange, but relaxation starts with your face. You don’t have to gurn your way around but smile occasionally and either blow the odd raspberry or through your lips like a horse. People may laugh, but you can laugh at them when you finish before them.

That’s it for September. Hope you have a fit, heathly and successful October. Cross- Country season starts in October and I think this year’s team will be one of the strongest we will have had for a number of years. Oh, and before you ask, sorry but I’m doing my hair.