Thanks for those who kept an eye on your runner of the month for August whilst I was away wrecking my legs falling out of canoes in rapids in France!  You were unanimous in your decision which made things very easy for me – many thanks, but back to that later.  I managed to return in time for Roger’s trail run on Sunday which was the first one I had been able to make – really enjoyed it and will definitely do it again.  Next one is around Dedham so would be good to see even more people give it a go.  Just wear some long socks or dig those running tights out!  A few of us are moaning about our nettles stings.  Big thanks to Roger as it takes a lot of work.  I bowed out of the social event in the afternoon as I had to face the mega pile of washing and Asda but I hear it was a really chilled afternoon and our fab social secretary Anita organised another great event.  Hope you have the date of the annual presentation evening on 6 December 2014 in your diary.

We have another 2 lady members, Maria and Caroline.  Say hello when you catch up with them.

Despite it being August you have been busy at Parkruns, Mersea Island 10 mile/5 mile and Clacton Half Marathon/10k.  Great to see Eileen back after her break to give her legs a rest.  Ruth and Bee pulled it out of the bag early in August with their best performances at the Colchester Parkrun.   Bee followed this up with another strong run at Mersea 10.  At the Clacton Half, Steph run a strong race to finish 8th lady.  Another busy lady has been Sue Sorrell who has done a Parkrun, the Clacton half and the trail run yesterday.  Karen, Davina, Sandra and Claire G also got their racing shoes on.

Not to go for any old local race,  Helene Tyler ran the inaugural Badgers Atherstone 10k with just a few small hills!!

Of course you ladies do not just stick to running, Sam Godden and Anna Mills had an amazing August with success in the Midnight Man Ironman at Dartford.  Anna  took part in the half ironman event; a 1.2 mile swim, 56 mile cycle ride and just under half marathon run. Her total time was 5:44:13.  She was 6th in her race and 5th in her age group, smashing her previous half ironman times.  Sam competed in the quarter ironman event, and was first woman home in 15th place overall. Her event consisted of a 950 metre swim, 28 mile cycle and 6.6 mile run.

So…..to your/my runner of the month……  Not only has she won a race this month, she has been dedicated to training really hard in the build up for the Nottingham Marathon next month, her second marathon of the year having already completed Manchester.   The men have been moaning that they are struggling now to keep up with her!!   Just bear in mind that she didn’t run at the end of last year after pulling out of the Tiptree 10 due to a blood clot.  So a huge well done, SAM GODDEN, you are the Runner of the Month for August. 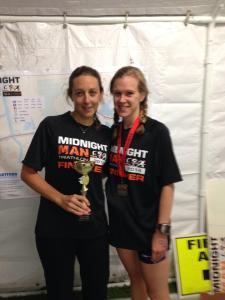 XC is looming on the horizon – dates on the website, first one Hylands Park on 26 October.  Great fun and lots of cake to reward you crossing the finishing line.

Any of you new ladies want to ask any questions on the above, come and see Lex and I.  One of us is generally at each training session.