This week, yet again, saw a blustery weekend. Many of you  used the calm before the storm on Saturday wisely and ran a parkrun.

We had 39 runners out this week (they may be more, but not all of you have GBRC registered as your club) at various parkruns around the country. At Colchester Castle there were course PBs for Justine Sheekey and Teresa Jones. Inga Hayden-Cooper ran a third successive PB at Clacton Seafront. Over at Highwoods, Magdalena Komorowska ran a course PB on the winter course. Craig Mitchell tried the Robin Oakley method of running two parkruns in a morning, starting at Highwoods and finishing before the last runner at Colchester Castle. Danny Draper ran with his son over at Felixstowe in a time of 38:02.

Martin Owen was a tourist at Rutland parkrun. This was an out and back course by the exposed Rutland Water. It started and finished by Normanton Church. Martin said the course was narrow and didn’t allow for overtaking but it was nice and flat.

Storm Dennis may have cancelled many races but it did not stop the Naseby 1645 16:45 mile race. This race is named after the Battle of Naseby, but it is held in February to allow for spring marathon training rather than in June and it’s anniversary.

The Battle of Naseby on 14 June 1645 was the last and most important battle of the First Civil War (1642-45), a decisive victory of the Parliamentarians under Sir Thomas Fairfax and Oliver Cromwell over the Royalists under King Charles I and his nephew Prince Rupert of the Rhine. It was fought in the rolling countryside of Northamptonshire, in the parishes of Naseby, Sulby, Sibbertoft and Clipston. 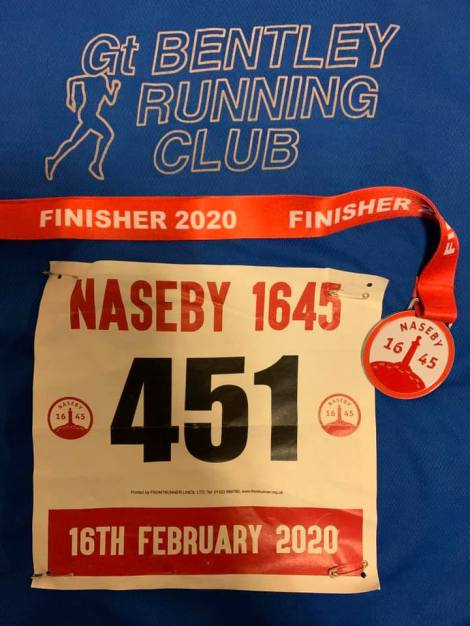 Paul Blackwell is nearing 200 marathons and this weekend he completed his 191st, on an adjusted course at the Mods Vs Rockers marathon.

Hopefully next weekend will be a calmer one. Happy and safe running everyone.

Runners of the Month for September