In a week that saw Kipchoge push the limits of human performance to achieve a sub-2 hour marathon time (I will not get dragged into whether it counts or it doesn’t count towards records, it’s an amazing achievement no matter how you look at it) the blue vests of Bentley were out in force taking part in runs and races, talking all sorts of distances and even travelling far away to reach a different time zone.

So, to kick off this week’s race report I will (metaphorically) travel to Krakow where the Oakleys partook in parkrun tourism and managed to run into another Bentley traveller, Rob Dyer, and his companion Caroline. First to cross the line was Robin with a time of 19:48. He was followed by Meera, who with 21:58 achieved her fastest time of the year so far. Rob completed the course in 28:23, no doubt saving his legs for the next day. But more on that later. 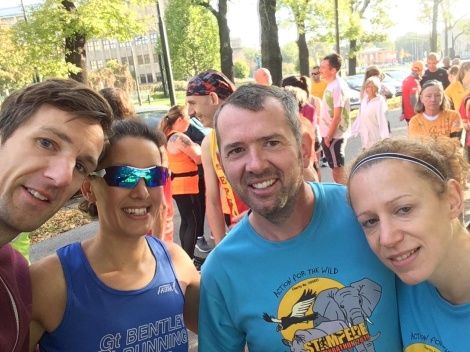 With Highwoods parkrun cancelled this weekend it was down to Castle Park to accommodate the parkrunners in Colchester. David Wright was the first finisher in a fantastic time of 18:46. Way to go David! Charlie Keitch followed in 21:40. Chusa is slowly but surely making her way to the 100th parkrun landmark and completed her 94th parkrun in 24:40. Team Hollidge-Hammond was up next, with Paul finishing in 24:44 and Debs in 29:28, which is an amazing effort considering the antics she got herself up to last weekend. Does she ever rest?

North of the border, the Essex-Suffolk border, that is, Eric Shaw completed Ipswich parkrun in 39:33. Eric had major surgery not that long ago and was incredibly happy of being back running and enjoying himself, even though he reported that somehow 5k seem much longer now that they once did. I’m sure he’ll be back in tip-top form in no time and 5k would once again be a simple “run in the park”.

Meanwhile in sunny Torre del Mar, in southern Spain, Anthea and Holly did their own parkrun version, more accurately described as beach run, whilst topping up their tans, no doubt. 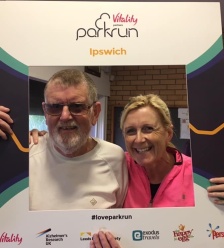 A happy Eric with a post-parkrun glow 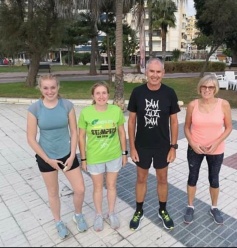 Runners in the sun
If Saturday is parkrun day it could be said that this past Sunday was half marathon day. Not one, not two but three different half marathons attracted the attention of Bentley runners.

As mentioned above Rob Dyer was in Krakow where he took part with Caroline in the 6. PZU Cracovia Półmaraton Królewski. Rob found the route very nice and agreeable despite it being on the warm side. But the heat was no match for him and he achieved a PB with a finishing time of 1:45:10. To top it all, Caroline also shaved 5 minutes of her PB. After such efforts is no wonder that they headed to sample a few refreshing beers.

Scott Young headed up North to take part in the Manchester Half Marathon. He set off too quick, as usual it seems, but managed to keep a steady pace and achieved a PB and Bronze Standard with a time of 1:46:44.

Closer to home, Hare & Tortoise Running hosted the Roman River Trail Half Marathon. Sue Wright made it her 4th half in as many weeks and thought the course was challenging but the lovely scenery compensated for it. Dave Jones described it as tough and muddy, especially as he was wearing the wrong shoes for the terrain. He persevered to the end and completed the course in 2:31:47. Teresa Jones also enjoyed the scenery and crossed the finish line in 3:11:40. Emma Levett-Welham also loved the race and would recommend it for next year. She got round in the tough conditions in 2:49:47, closely followed by Mark Crittenden, who finished in 2:52:28. Not satisfied with parkrun the previous day, Team H-H also put an appearance with speedy Debs finishing 15th overall in a time of 2:24:03.7 and Paul lagging behind in 2:24:03.9 – those two tenth of a second made all the difference! 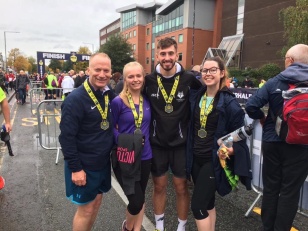 Scott with his Manchester Half medal 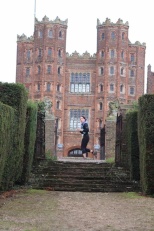 Emma in the Roman River Trail Half
Tiptree hosted their popular annual 10 mile race as well on Sunday, which was well attended by Bentley runners. Tim Ballard felt good from start to finish and that resulted in a PB, club Silver Standard and a place in the Club Champs with a time of 1:02:38. Another over-achiever was Barbara Hilder who bagged herself a trophy as first finisher in her age category and a club Diamond Standard. Peter Benton also posted a great time of 1:11:15 for that course whilst Eileen Shafford achieved a PB and second place in her age category completing the race in 1:15:31. More club standards were won by Veronica Alexander –Gold; and Sarah Greeham – Silver. 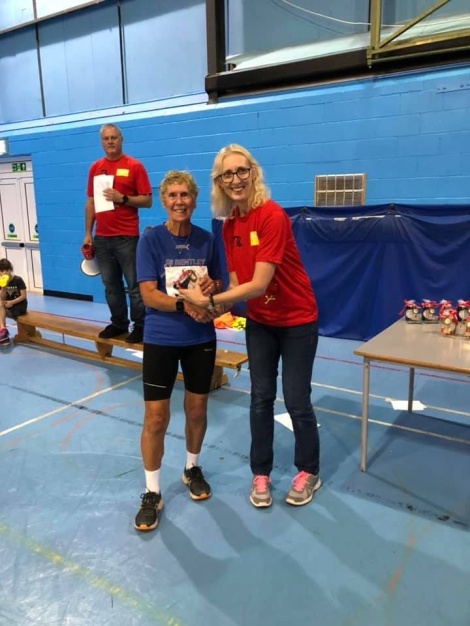 What a week! We had PBs! We had Standards! We had trips to exotic destinations (Manchester – of course!). Bring on the first cross country event next Sunday!

On that note, please remember that the club will provide as usual tea and coffee but no disposable cups so please bring your own. Also spare a thought for the environment and share a car whenever possible. Now, I better go and try to find my cross country shoes!

Runners of the Month for September