Twelve months ago the Beast from the East had us all huddled under our duvets, snowed in our homes whilst races had to be cancelled due to the treacherous conditions. Fast forward to this past week and the weather has been warm for the most part, until Storm Freya decided to blow some wind and rain our way.

With spring marathon season around the corner, Bentley runners took to roads and trails to train, compete or simply run around in the not so bad weather and there were PBs, club champs spots and club standards galore.

Essex 20 took place on Sunday. This was one of the races cancelled last year due to the snow and made a comeback to its former location of Rochford after a 12 year absence. The undulating course (all runners know that “undulating” can mean anything from gentle slopes every now and then to a massive hill climb thrown in) saw five Bentley Blues completing it. First to cross the line was Tim Ballard who was hoping for 2h 20min but instead smashed his target, finishing 76th overall (42nd Essex) in a fantastic 2h 12min 57s. Gaining a silver standard and claiming a club champs position. Not bad for his first 20 miler! Next up was Charlie Keitch who was running according to plan when he suffered an unplanned cramp-attack and had to ease down his pace. He completed the course in 2h 20min 30s, which is a fantastic time with or without cramps. He also earned a silver standard and club champs spot. Meera Rajoo-Oakley had what she called a PW but I called a very good training run time of 2h 49min 51s. Rounding up the Bentley presence were Paul and Sarah Davison. Sarah ran her first 20 miler in 2h 52min 54s, achieving a gold standard and club champ spot in the process. Paul paced her to perfection, finishing in 2h 52min 55s himself. 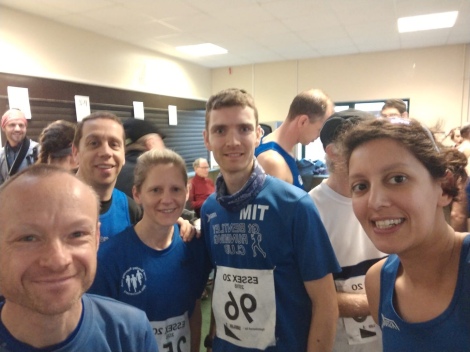 The Cambridge Half Marathon also took place on Sunday and a single Bentley runner took place: Rob Blackman, who ran his first proper race back from injury in a time of 1h 34min 53s.

Also on Sunday, the juniors were out and about in Colchester junior parkrun with Angel Jasper completing the course in 9:39, followed by Brody Wakeling in 12:56.

Whilst we were sleeping (at least I was sleeping) Janine Simpson was out in the land of the rising sun running the Tokyo Marathon. It was wet and cold but that did not deter her (or any of the other 50,000 runners for that matter). A very jet-lagged Janine completed the long 26.2-mile course in 4h25. Not only did she earn a marathon medal, she also got her hands on the very rare six stars medal awarded to those who have completed the six marathon majors: New York, Boston, Chicago, London, Berlin and Tokyo. With only 300 runners in the UK in possession of the six stars medal I’m sure you’ll join me in congratulating Janine on her outstanding achievement.

Also opting to run abroad, but much closer to home, Chris Warren completed the Benidorm Half Marathon on Saturday evening. This was Chris’ first road race in two years, with a great finishing time of 1h 32mi 52s. Good to see you’re back and running again, Chris! Hope you rewarded yourself with a nice cold caña afterwards.

It seems that not a week goes by without Paul Blackwell running a marathon and this week was no different: Paul run the Book Day Marathon in King’s Wood, Kent, in 5h 42min 54s and bagging a very colourful medal for his efforts.

Saturday also saw the Mayor’s Big Run taking place on the University of Essex grounds. The multi-terrain 5k run was organised by the Mayor of Colchester, Peter Chillingworth, with all proceeds going to charity. Saturday was a busy day and competition for runners’ attention was high but several blue vests made it to the run. For the ladies we had Leoni Harvey, Anthea Colsell and Meera, who finished with a second lady trophy. For the gents, James Royce which with a time of 20:44 achieved a bronze standard. 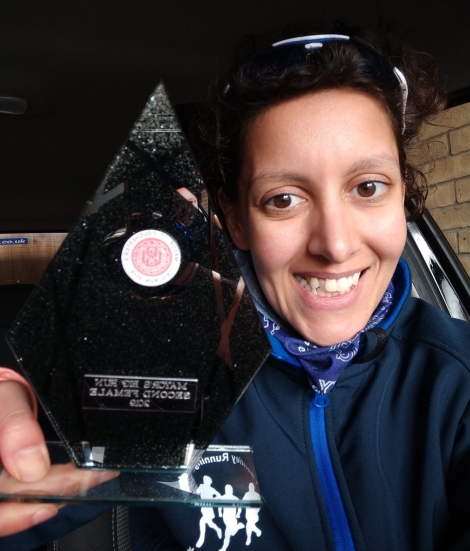 Another little event that took place on the first Saturday of March was the Layer 5 test run. The Layer 5 race will take place on 7th April and out there testing the route and the clarity of the signs were nine intrepid volunteers, two of them Bentley runners. The course was multi-terrain with a water-feature to freshen up your feet as you run up and down the countryside around Layer de la Haye. Lee Clarkson was the second test runner home, completing the 5-mile course in 38:29. Chusa Bautista Fructuoso was the second-from-last runner home in 50:28. How’s that for symmetry?

Following the success of the test-run the previous Saturday, Highwoods parkrun held its inaugural race on March 2nd. The course is a hilly (seems to be a requisite for Colchester-based parkruns by the looks of it), mixed-terrain of mostly grass and trail and will be an excellent training ground for cross-country. By the comments of the runners is challenging but very pleasant and I for one agree with them. Bentley runners must love hills because a total of 23 of them decided to give the new parkrun a go. First to conquer the distance was Paul Connell with a palindrome time of 20:02. The Bootys decided to run with their dogs and John was second to finish for Bentley in 20:24. Kim Louise made the mistake of starting too far back and could not quite get started as desired, finishing in 31:07. Milly Presland was first lady with a time of 20:37. In quick succession we had James Royce (21:12), Paul Davison (21:54) and Peter Benton (21:57). Another 2 legs + 4 legs duo were Ben and Janice, who got round the course in 22:40 despite Ben not feeling on top form. Andy Stephens followed in 22:52. Lee Clarkson got slightly lost on the way to the start and proceeded to overtake runners, including the one in the suit of armour, to finish in 24:11. After him followed Charlie Keitch (25:24), Jason Skelton (25:26), Scott Young (25:28) and Tomasz Komorowski (25:37). I do wonder what their GAM times are following their XC meal the previous night. Russell Clarke was next with 27:01. He was followed by Anthea Colsell (27:45) who incorporated parkrun as part of a longer run (also taken into the Major’s Big Run), Emma Wakeling (27:49) who enjoyed a relaxed pace around the course, and James McCullagh (28:22). Separated by seconds were Vicky Presland (28:24), Chusa (28:25) and Debs Hollidge (28:26) running with Tilly the dog, who wasn’t overly impressed by the course and managed to wiggle out of her collar. Closing the Bentley ranks we had Sarah Davison (28:42) and Teresa Farmer (32:59).

Two Bentley runners decided to explore parkruns further afield. Magdalena Komorowska took part in the Brandon Country parkrun, a flat course through the stunning Elveden Forest. She achieved a silver standard and finished third lady with a time of 24:13, which also earned her a spot in the club champs. Rob Dyer headed west to Dinton Pastures parkrun, which he completed in 31:19.

I don’t know about you but I lost count of the number of PBs broken and standards achieve which can only mean one thing: this was an amazing weekend for Bentley runners! Same time next week?