This week there has been racing of different distances ranging from 5km to marathon. The racing calendar is now looking busy for the next few months, so whether you are training towards running a particular race or racing as part of your training plan I am sure everyone will be keeping the race reports full of  personal bests and great achievements.

This weekend we had some afternoon 5km action in the form of Ipswich Jaffa’s 5k Twiglihght race. Trying out a new format this year they had 3 waves of 5km running aound Ipswich Waterfront. The elite racers ran last to ‘chase’ the twilight and this race was won by  Nick Goolab in 13:51 a Belgrave Harrier and Faye Fullerton, a Havering AC runner in 16:01. We had two Bentley Blue runners taking part. Paul Hollidge came 19th in the 20-30 minute wave finishing in an elite standard time of 19:51. John Bush ran in the 30 minute plus wave and completed it in 29:59.

Sunday saw plenty of races happening. Halstead and Essex Marathon was being held for the 24th time and it was also the Essex Championships. Great Bentley was represented by eight runners on this very undulating course. Charlie Keitch was using this race as a training run for an upcoming ultra and he crossed the line in 3:28:44. He had helped pace Nick Goodman a good stretch of the race; Nick finished in 3:40:10 which is a PB of over 14 minutes, great running Nick! Kevin Stevens finished in 3:36. Paul Carlisle put his recent downhill training into good use and knocked 7 minutes of his previous best time to finish in 3:41:51.  Every training session will benefit you all in some way. . Luke Groves has been preparing for the triathlon season and used Halstead as a long run. His fourth marathon distance run saw him knock an hour off his PB with a finishing time of 4:30:10, a fantastic time and inspirational run from our male captain! Next came the turn of the ladies. Geraldine Springett was returning to Halstead for the second time and she managed a PB of 4:14:45 crossing the line at the same time as Deborah Cubberley.  Finally winning an Essex medal was Barbara Law who finished in 5:07:24. Well done Barbara! 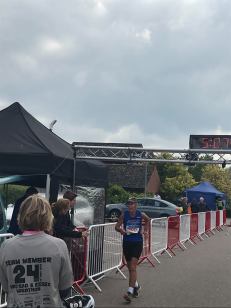 It was the 10th anniversary  of Colchester 10k, a race run by the Rotary Club. It starts and finishes around Abbey Fields with an opportunity for a track sprint finish, something that every Great Bentley runner took advantage of. We had fifteen Bentley Blues out on the course including a pacing run by Lee Clarkson ably wore the 50 minute vest and finished in 49:51. Paul Connell ran 39:25; Rob Blackman 41:02; Paul Davison 41:42; Richard Moor 45:35; Magdalena Komorowska 47:53 a PB of nearly 6 minutes, superb effort Mags; Graham Clarke 49:06; Jack Wicks 50:02 a PB of over 2 minutes, great running Jack;  Anna Young 54:31; Tomasz Komorowski 56:20; Neil Robins 56:25; Louise Upston 1:05:20; Emma Welham 1:08:07 another PB for Emma, well done; Simon Price 1:11:42 and Michael Sommerlad in 1:50:31 who was allowed to start early and was joined by Marion Simmons., fantastic running Michael.

In Great Baddow it was good to see Adrian Cherry back in good running form and a Bentley Blue vest. He ran the Great Baddow Charity 10 mile race in 1:16:27 a PB of 5 minutes. Well done Ade!

Anthea Colsell ventured to Suffolk to take part in the Bury to Clare Challenge, an 18 mile route over the gently undulating countryside of West Suffolk, through the villages of Hawstead, Whepstead, Somerton and others. Anthea, a lone Bentley Blue at this race, finished in a great time of 3 hours 18 minutes.

Now finally on to the round-up of parkruns for this weekend:

Finally there was a day trip to Jersey parkrun made by our female captain Meera Rajoo-Oakley, an early start for a 3rd female finish in 22:14. A future Great Bentley Running club trip when flight prices come down again maybe?!

On Sunday at Junior parkrun there were good runs from George Jones 14:00; and Yasmin Leek 15:16 at Colchester whilst over at Clacton Angel Jasper ran in 10:08 and was third girl home.