The cold and wet weather has dragged on and on, but there were some rays of sunshine this week – at least on the running front. Thankfully (for me) not the mammoth amount of races and PBs to report, but the club were still prominent and active on the circuit.

There was a good turnout of blue shirts at this annual tough 5 mile race around the streets of Sudbury, on Good Friday. Tomasz Komorowski paced Magdalena time of to a PB of 40.16 (which was also a 5 mile PB for Tomasz) and gave Mags a place on the Club Championships, and helped cement Mag’s March Ladies runner of the month award !  John Bush ran in (52.29), Belinda Palmer-Barnes with (48.29) and Sue Sorrell with (50:35). Eric Shaw did run also, but unfortunately felt cheated as the usually well organised event got spoilt by the fiasco of issuing numbers on the day only, and closed up nearly an hour before the start, meaning Eric ran with no number. Apologies if I have missed any others who ran the race, but I could only see the above on the race finishers list which came out only on Tuesday .

Benjamin Ficken and Janice were both very active this week, also travelling a considerable distance. On Saturday Team BenJanice headed to the Norfolk coast to run race 1 of the Nelson Knee Knobbler series at Caister, opting for the 10k race. Run almost entirely on sand, Ben and Janice did really well to finish the difficult race, hindered by windy conditions, in 52:08. Ben said it was probably the toughest 10k he has ever run (and if she could speak Janice would probably say the same). 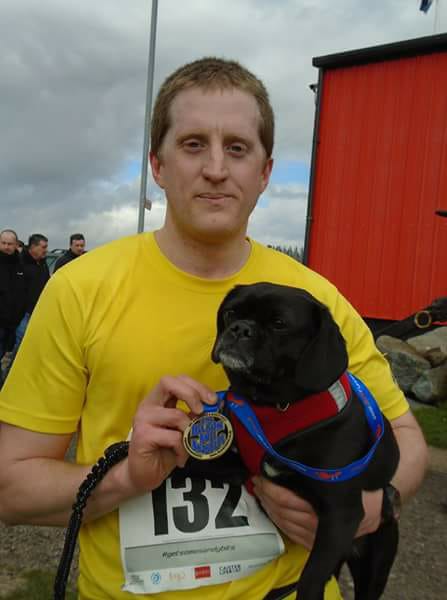 The following day BenJanice travelled all the way to Henley, running the Eggheads race, another 10k. The handicap this time was having a dozen eggs strapped with rubber bands to your head – with penalties applied for every egg broken at the finish. BenJanice were doing very well, but the hurdles at the end of the course added more than a few minutes to the finish time with the egg penalties.

Great Bentley members headed off to the Mersea Island Park run, for a Club park run takeover. This is a great course, partly in woodland and all off road, with some nice sea views : we were even treated to a little sunshine, a welcome respite. Well done everyone who volunteered – it was very much appreciated by the event organisers, who posted “A big thank you to Great Bentley Running club for taking over this event, providing volunteers, pacers and cake! “.  The volunteers who carried out various scanning, bar codes, and pacing and tail runners duties were Scott Young, Mark Crittenden, Sue Sorrell, Marion Simmons, Nina Simmons, Michael Simmons, Caroline Searle,  Luke Groves,  Helene Tyler, John Bush, Andy Stephens,  Claudia Keitch, Chusa Bautista Fructuoso,  Lee Clarkson,  Emma Wakeling, Laci Wakeling, Brody Wakeling, Craig Mitchell, Geraldine Springett,  Magdalena Komorowska, Tomasz Komorowski, Paul Connell,  Lucy Kettlewell, and Emma Welham (apologies if I have missed anyone). In terms of times the pacers ran and finished, I list them below (pacers to varying degrees of accuracy – I blame the slighly short course 🙂 : Lee Clarkson (24.00), Geraldine Springett (24.49), Andy Stephens (25.47), Luke Groves (27.27) , Caroline Searle (29.30), Paul Connell (19.21) , with Claudia Keitch (38.03) and Hélène Tyler (38.04) as fast tailrunners !

Raphael Parkrun, which is in Romford. The travelling Preslands were among the 305 runners taking part, with Vicky Presland, (23.15), 7th place female, Phil Presland (23.50), chasing daughter Milly to a new PB of (19.20) in 14th place and 2nd female.   Team Cubberidge also travelled there, Debs Cubberley ran the 2.5 lap undulating course in (25.05), finishing as 12th female, while Paul Hollidge decided to let his hair down and ran to 27th place, in a fast (20:46), Paul’s fastest 5k for some time.

Prudhoe Riverside Park Run, all the way up in Northumberland, a mainly trail park run. This was a predictably wet run for new ladies captain Meera Rajoo-Oakley, who ran (23.17) , for 5th place lady (24th overall), with Robin Oakley (22.33), in 21st place overall of the 136 runners.

At Colchester recreation ground on Sunday, Angel Jasper ran a time of (10.23), with George Jones finishing in (18.59).

Let’s hope for some nicer weather soon ; nevertheless, well run (or voluteered) everyone, and keep safe and smiling !