This week’s action started with the second instalment of the Friday 5 series, the Kirton 5. After a late rallying cry from Karen Skene, seven Great Bentley runners took part in the race hosted by Felixstowe Road Runners. Remarkably the seven runners managed to earn five positions in the club championships.

Deborah Cubberley took nearly two minutes off of her 5 mile PB finishing in 44:32 and earning a bronze standard in the process. Incredibly this made June the fourth consecutive month that Debs has achieved a club standard. We’re all eager to see which standard she goes for in July. Paul Hollidge was the first Bentley finisher in 35:30, earning him a place in the club championships.

The Bentley Seven at the Kirton 5

Gary Parker ran at Maldon Prom parkrun for the first time. Completing the 5k course in an impressive 19:30, Gary was the 5th finisher. Louise Upston travelled to Reading parkrun and completed the course in 28:35. Martin Owen ran Great Cornard parkrun in 23:49 – his fastest 5k since 2014. Keith Oakley ran Ipswich parkrun in 25:53. 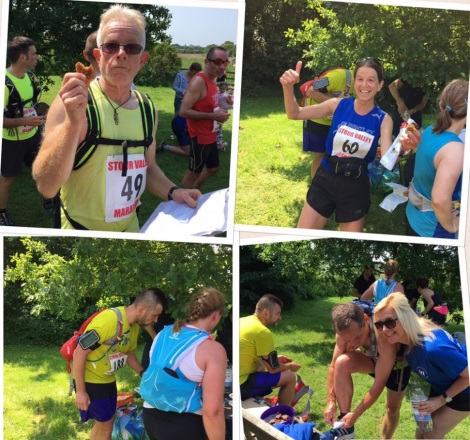 Sunday started a little cloudy, but turned into a gloriously sunny day. Probably not what our brave runners tackling the Stour Valley Marathon had hoped for. But despite the conditions they produced results to be proud of as they navigated their way around the famously difficult hills of the (technically ultra-) marathon route.

Six Great Bentley runners ran the race with many more providing much appreciated assistance and support at several check points. Meera Rajoo-Oakley knocked an impressive 18 minutes and 53 seconds off of her time from the same race last year, crossing the line in 4:36:56. Charlie Keitch was the first Great Bentley runner home, finishing in a 4:11:34, and 14th position overall. A very respectable time, with which he said he was happy “given the hills (my God, the hills) and the heat.”